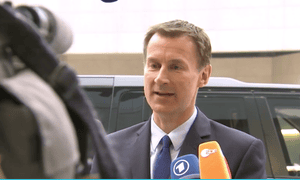 Rolling coverage of the day’s political developments as they happen

May to visit Berlin tomorrow for Brexit talks with Merkel

Theresa May is going to Berlin tomorrow for Brexit talks with Angela Merkel, the Economist’s Tom Nuttall reports.

At the weekend Philip Hammond, the chancellor, said that there were “no red lines” for the government in its talks with Labour aimed at finding a Brexit compromise. This morning, in a doorstep on his arrival at the EU foreign affairs council, Jeremy Hunt, the foreign secretary, said more or less exactly the same thing. In normal circumstances cabinet ministers adopting the same line would not count as news. But cabinet discipline is now so threadbare that it starts to become interesting. For Hammond, perhaps the cabinet’s leading pro-European, to say “no red lines”, implying he is open to a customs union, is not a surprise. But for Hunt, a remain-voter who is now reinventing himself as a Brexiter, to say the same thing is a bit more noteworthy.

Here are the main points from the Hunt doorstep.

Well, we don’t have a majority in parliament, and so we have to look to other parties to seek agreement that will allow us to get Brexit over the line in parliament as the law requires. You can’t go into any of those discussions with big red lines because otherwise there’s no point in having them, but we are very clear about the type of Brexit that we want. That’s in our manifesto, and we’ve made that clear.

So what I think I will be saying to me colleagues in the European Union today is you can see from this that Theresa May is leaving no stone unturned to try and resolve Brexit. They want Brexit to be resolved as quickly as possible, so do we, so do the British people, so do MPs, and so we are doing absolutely everything we can to try and get a resolution to get Brexit over the line.

Those people in the European council, Theresa May’s counterparts, the other European leaders, have been saying for some time Theresa May needs to open cross-party talks to try and find a consensus to get a Brexit agreement over the line, and that’s what she’s doing. And in our system that is very, very difficult. For Theresa May to open talks with someone like Jeremy Corbyn is not at all easy. But she is doing that because she is totally and utterly determined to deliver Brexit for the British people.

I can’t tell you that I’m very confident or that I’m not confident. We are going into these talks sincerely, and we have to see what the outcome is.

We’re doing something different … and we’d like to explain why. Our journalism now reaches record numbers around the world and more than a million people have supported our reporting. Unlike many news organisations, we haven’t put up a paywall – our journalism remains accessible to all, so more people have access to accurate information with integrity at its heart. This is The Guardian’s model for open, independent journalism.

Our model enables people to support us in a way that works for them. Readers’ support safeguards our essential editorial independence.

For as little as €1 you can support the Guardian – and it only takes a minute. Thank you. Make a contribution – The Guardian

Michel Barnier, the EU’s chief Brexit negotiator, is flying to Dublin today to meet the taoiseach, his deputy and the finance minister for talks ahead of Wednesday’s European council summit.

With no sight of an agreement between Theresa May and Jeremy Corbyn, no-deal planning will very much be on the agenda.

Over the weekend Leo Varadkar said it would be “logical” for checks on goods coming in from the UK to be carried out in Belfast and Larne as a way of protecting the single market while keeping the border with the republic invisible.

He expects the UK government to deliver the promise made in the December 2017 joint report with all the provisions of the backstop, including customs checks at Northern Ireland ports to put in place in the event of a no-deal scenario. Barnier will meet Varadkar at 2.30pm with a press statement expected at 3.30pm.

“The meeting will be an opportunity for the two to discuss the situation regarding Brexit, ahead of the European Council meeting in Brussels later this week,” said a spokesman.

The UK is now just four days away from the latest Brexit deadline and, unless another article 50 extension is agreed at the emergency EU summit on Wednesday (which probably will happen, although it is not inevitable), it will slam into no-deal at 11pm on Friday.

That’s why Theresa May is still trying to cobble together a last-minute compromise acceptable to Labour. She released an uncharacteristically homespun video yesterday defending her decision to reach out to the opposition and, as my colleague Peter Walker reports, talks between the government and Labour continue today.

Theresa May unplugged: new, laid-back PM speaks from the sofa

Last night, on the Westminster Hour, Robert Buckland, the solicitor general, claimed that a cross-party deal to support the UK staying in a customs union with the EU was the most likely compromise that might be achieved. He said:

Whilst I don’t pretend it’s ideal – I think there are some real drawbacks with it – it does mean we deliver the end to freedom of movement and it does mean that we deliver the vast majority of, I think, the aims of Brexit, which was to leave the institutions of the European Union. It’s not perfect, but frankly in this particular hung parliament none of us can get perfection, we need to compromise… something approximating a customs arrangement or customs union I think would be the most likely outcome.

But Buckland, who voted remain, was not reflecting a consensus view amongst ministers. Yesterday Andrea Leadsom, the Brexiter leader of the Commons, indicated that this would be unacceptable. Asked if May would agree to a full customs union, Leadsom said:

My expectation – and I’m not party to the discussions – is that the prime minister will only seek to agree those things that still constitute Brexit.

And this morning, in his Telegraph column (paywall), Boris Johnson, the Brexiter former foreign secretary, said a customs union would be the “worst of both worlds”. He said:

In order to get Corbyn onside, the government is apparently willing to abandon the cardinal principle and central logic of Brexit. Jeremy Corbyn and his team have demanded that the UK must somehow leave the EU, but remain in the customs union. That is their price. If the government were to agree, it would not only mean repudiating a manifesto pledge, and tearing up a promise made thousands of times in parliament and elsewhere. It is far worse than that.

If the UK were to commit to remaining in the customs union, it would make a total and utter nonsense of the referendum result. We would be out of the EU, but in many ways still run by the EU. It would be the worst of both worlds, not just now, but forever – and that is why I find the news so appalling that I don’t really believe it.

Here is the agenda for the day.

3pm: Peers are due to start debating the remaining stages of the Yvette Cooper bill requiring the PM to request an article 50 extension.

3.30pm: Michael Barnier, the EU’s chief Brexit negotiator, is due to meet Leo Varadkar, the Irish prime minister, in Dublin.

3.30pm: Jeremy Wright, the culture secretary, is due to make a Commons statement about the online harms white paper.

5.30pm: Jeremy Corbyn is due to meet Mary Lou McDonald, the Sinn Fein leader, in London.

And the government/Labour Brexit talks are due to continue, although we don’t have details as to how and when

As usual, I will be covering breaking political news as it happens, as well as bringing you the best reaction, comment and analysis from the web, although I expect to be focusing mostly on Brexit. I plan to post a summary at lunchtime and another when I wrap up.

You can read all the latest Guardian politics articles here. Here is the Politico Europe round-up of this morning’s political news. And here is the PoliticsHome list of today’s top 10 must-reads.

I try to monitor the comments BTL but it is impossible to read them all. If you have a direct question, do include “Andrew” in it somewhere and I’m more likely to find it. I do try to answer questions, and if they are of general interest, I will post the question and reply ATL, although I can’t promise to do this for everyone.

If you want to attract my attention quickly, it is probably better to use Twitter.