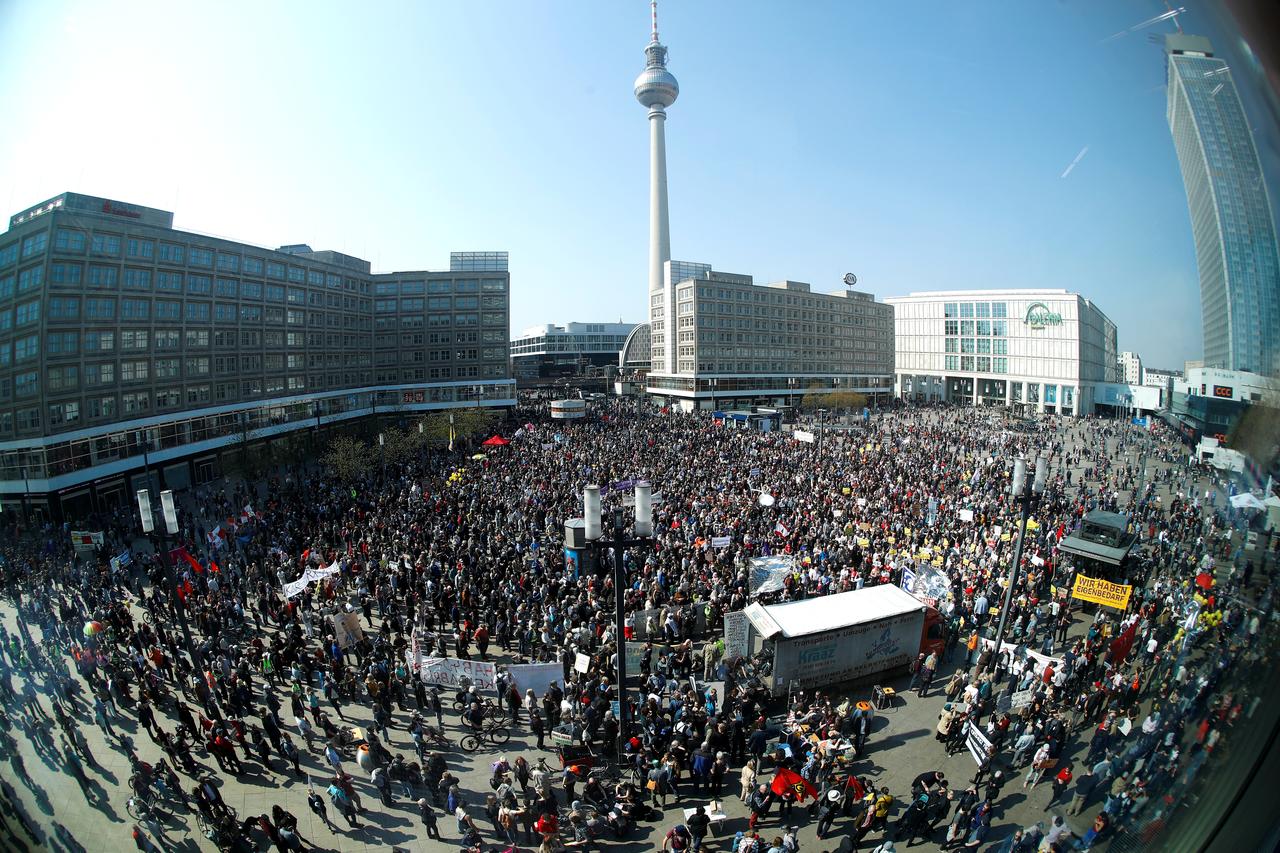 BERLIN (Reuters) – Thousands of Berlin residents took to the streets on Saturday to vent anger over surging rents and demand the expropriation of more than 200,000 apartments sold off to big private landlords, which they blame for changing the character of the city.

A general view shows people taking part in a protest against rising rents and a housing shortage in Berlin, Germany April 6, 2019. Picture taken with a fish eye lens. REUTERS/Fabrizio Bensch

Activists have started collecting signatures for a ballot proposal that would require the city to take back properties from any landlord that owns more than 3,000 apartments. Polls suggest such a measure could pass, forcing the city to consider spending billions of euros buying privatized housing back.

Demonstrators marched through the city center under a giant model shark. Banners read “against rent sharks and speculators”.

“We have had very bad experiences with these property companies for years, and we know that they answer to their shareholders and not to tenants. We don’t want them in our city any more,” organizer Rouzbeh Taheri told Reuters television.

For decades after unification in 1990, Berlin became a magnet for artists, musicians and students drawn by housing that was far cheaper than in other major European cities. Around 85 percent of Berliners rent their homes rather than own them.

But with an influx of some 40,000 people a year in the last decade, rents have more than doubled since 2008, according to a study by online housing portal immowelt.de. The city is no longer a bargain for newcomers, and many of its longer-term residents say they are struggling.

Among the properties that have been sold off to the private sector are many of the large landmark Communist-era housing projects built as showpieces under the former East Germany. Many have been acquired in recent years by Deutsche Wohnen, the city’s largest landlord with around 115,000 flats.

Campaigners, who call their movement “expropriate Deutsche Wohnen”, have six months to gather 20,000 signatures and until February to collect a further 170,000 to force a referendum. A February poll showed 44 percent of Berliners support renationalizing flats, while 39 percent oppose it.

Deutsche Wohnen and other landlords say the specter of expropriation could exacerbate the problem by deterring new construction: “Expropriation brings no relief for the drastically tight housing market in the capital,” said Deutsche Wohnen Chief Executive Michael Zahn.

The Berlin Senate estimates the cost of buying back property at up to 36 billion euros ($41 billion). The Social Democrats who lead the coalition that governs the city say such funds would be better spent building housing than re-nationalizing it. They instead favor a five-year rent freeze.

“I understand the anger against property firms that want to squeeze every cent out of renters. But expropriation takes years and doesn’t create a single apartment,” the Social Democrats’ national leader Andrea Nahles told Bild am Sonntag newspaper.