Battle of Waterloo Bridge: a week of Extinction Rebellion protests | Environment | The Guardian 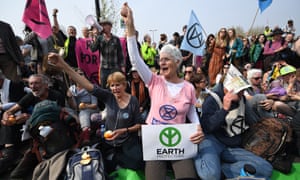 On Monday morning a strange sight appeared, edging its way through the buses, taxis and shoppers on Oxford Street in London.

A bright pink boat, named Berta Cáceres after the murdered Honduran environmental activist, was being pulled carefully through the traffic, eventually coming to a halt in the middle of one of London’s busiest thoroughfares.

Bemused onlookers watched as activists secured “Berta” to the road, while others glued themselves to its garish hull. And with this act of flamboyant defiance, Extinction Rebellion’s climate protests had begun.

In the five days that followed, thousand of people, from pensioners to young parents with toddlers, scientists to city workers, teenagers to teachers, have occupied four landmarks in the capital, defying repeated police attempts to remove them and causing widespread disruption. Smaller disruptive events have taken place across the UK and in 33 other countries.

By late Friday evening police were saying that 682 people had been arrested in London. Three supporters who glued themselves to a train on Wednesday have been imprisoned. That same day four more attached themselves to the fence outside Jeremy Corbyn’s house, declaring the Labour leader “the best hope this country has got” to meet the challenges of the unfolding climate crisis.

And on Friday about 20 young protesters, all born after 1990, unfurled a banner on a road outside Heathrow airport, asking: “Are we the the last generation?”

But perhaps the protesters’ biggest achievement is that millions of people have heard their message that the world is in a spiralling climate emergency that demands transformative change to avoid catastrophe.

Through hundreds of articles, editorials, and radio and TV interviews, including some hostile critiques of its tactics, Extinction Rebellion’s message has gone mainstream.

“It’s been a resounding success,” said one of the group’s organisers, Howard Rees, surveying the scene on Waterloo Bridge on Thursday afternoon. “What are we on? Day four? We are holding all the sites, we are attracting loads of new members, everybody’s having a great time, there’s a party atmosphere everywhere … the police are generally positive and friendly towards us and agree with what we’re doing. And we are getting our message out there. It couldn’t be going better, really.”

And although activists gathering in the sunshine on Waterloo Bridge had no idea how long they would be there – or what the police reaction would be – there was a jubilant atmosphere as they swarmed on to the road.

“I am so worried about what’s happening to the planet,” said Laura Sorensen, a retired teacher from Somerset. “We are on a knife-edge now and I felt strongly that I needed to get out and show myself, rather than just talk about it in the pub.” 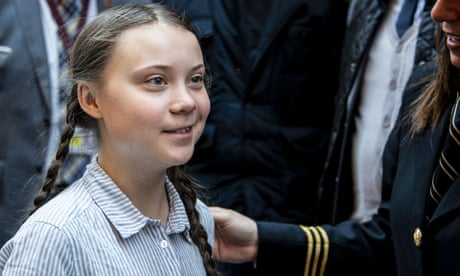 A little further along Waterloo Bridge was Josiah Finegan, a 22-year-old who had never been on a protest before.

“I am freaking out about the climate, to be honest,” he said. “There have been so many warnings from scientists about what we are facing, it is quite shocking.”

Before going to join the protest, Finegan added: “I have no idea what to expect or what might happen … I just heard about it and felt I had to come.”

Police mingled with protesters, chatting and watching as flowers, trees in large tubs, a mini skate ramp and even a lorry were dragged into place on the normally traffic-choked bridge.

Looking on, one senior officer said the police response would be proportionate.

“These people are explicitly peaceful, they have liaised closely with us over their plans and have a legitimate cause. We all have a limit on what we think is the right level of action to take but I think everyone is worried about climate change.”

Over the ensuing days, the success, tactics and sheer determination of the demonstrations took many by surprise, even though they had been more than a year in the planning.

The strategy of peaceful mass disruption was tested in a much smaller series of protests over air pollution last year, with activists blocking busy junctions for 10 to 20 minutes at a time. The group hopes such protests act in two ways: they put economic pressure on the government by disrupting the infrastructure, and they force people to confront the reality of the climate emergency by interrupting their daily lives.

Once they had honed the process, organisers spent months holding public meetings around the country. Thousands of people gathered in libraries and meeting halls, cafes and universities, pubs and churches to hear dire warnings about the consequences of the climate emergency and what they could do about it, with hundreds signing up to take part in larger-scale rebellions and be arrested.

Speaking to the Guardian after a meeting last summer, Roger Hallam, one of the key figures behind this week’s protests, said: “It feels like we are tapping into something very powerful in terms of the frustration and urgency many people are feeling as the evidence mounts of the scale of the climate emergency we are facing.”

Ten months later, it seems he was right.

The Extinction Rebels have got their tactics badly wrong. Here’s why

The group’s success this week has not come without internal tensions, exacerbated by the non-hierarchical structure of the group. The decision to block trains, and potentially tubes, was hotly debated long into the night on Tuesday. A similar discussion took place over the plan to hit Heathrow.

And as the week has gone on, and the attention of the world’s media has slowly turned to the protests, the pressure on the volunteers trying to organise and control it has only increased.

“The phones never stop ringing, we have press inquiries round the clock from media around the world … it wasn’t like this at my old job,” said one of Extinction Rebellion’s young media team, who took a break from her career to volunteer a few months ago. “But this has been one of the most exhausting, exhilarating weeks of my life.”

Extinction Rebellion says thousands of people are signing up every day. The group’s rise to prominence has come amid mounting evidence of climate breakdown, from floods to heatwaves, melting ice sheets to poor harvests. 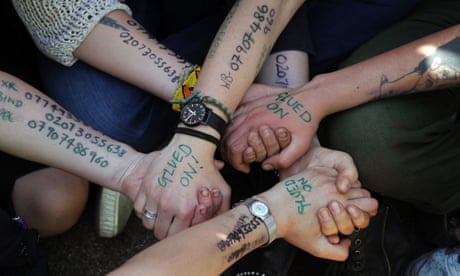 Its message about the scale of the climate crisis has resonated because it is backed up with science. On Thursday night David Attenborough presented a primetime documentary on the BBC, Climate Change: The Facts, supporting Extinction Rebellion’s central claim that the world is in a climate emergency. Earlier in the week, Mark Carney, the governor of the Bank of England, said the global financial system faces an existential threat from climate change and must take urgent steps to reform.

As the sun goes down on Waterloo Bridge on Thursday night, Finegan is dancing and laughing with a group of 20 or so people of all ages and backgrounds, accompanied by a collection of drummers and other musicians.

“It’s been insane, amazing,” he says. “I have been worrying about this stuff so much but the last few days, well, I feel like this has changed everything.”