‘My heart and soul is in grief’: Muslims in Christchurch mourn victims of massacre | World news | The Guardian 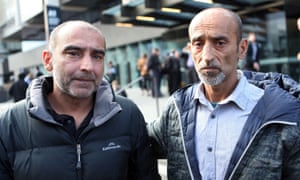 In the wake of the worst mass killing in the nation’s history, New Zealanders have rallied around the shocked community

In the silence that wrapped Christchurch after a day of sirens, many struggled to find the language for what had happened to the city.

At a cordon several metres from the mosques where the deadly rampage unfolded on Friday, people came, one by one, to pay their respects. A few shed quiet tears or spoke in hushed tones, but mostly, they just stood and watched.

Mark Isaac was among them. Not allowed into the hospital where his friend from football was fighting for his life, he went to the scene of the massacre instead. 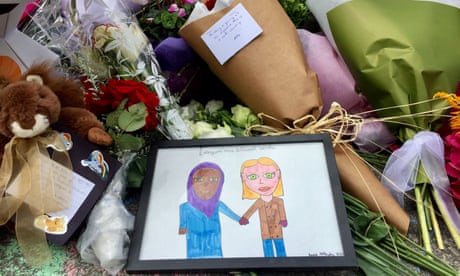 ‘We love you’: mosques around world showered with flowers after Christchurch massacre

“Unfortunately we are not allowed to visit him in the hospital just yet and now we just have to wait and see what happens to him,” Isaac said. “I feel there’s not much I can do to help but be here and send my love.”

In the wake of the worst mass killing in the nation’s history, which left 49 people dead and 39 injured, New Zealanders rallied around the Muslim community as heartbreaking details continued to emerge about those killed and injured.

Daoud Nabi, a native of Afghanistan and community leader who moved to New Zealand in 1977, was among those killed. His devastated son, Yama al Nabi, told reporters outside of the district court; “He jumped in the firing line to save somebody else’s life and he has passed away”.

Yama al Nabi was running late to meet his father at Al Noor mosque, and arrived to a scene of slaughter. He waited outside, asking about his father. A friend eventually told him “your father saved my life”. His brother, Omar, later confirmed their father had been killed after reviewing footage of the massacre.

Thousands of New Zealanders attended memorial sites and mosques throughout the country on Saturday in support of the friends and family of the dead. Several of those killed were children.

Prime minister Jacinda Ardern travelled to the city to comfort the Muslim community. At the Canterbury Refugee Resettlement and Resources Centre, she told them: “New Zealand is united in its grief and we are united in our grief.”

In Hagley Park, close to Al Noor mosque where 41 people died, a mound of flowers and a sheet full of messages of love grew throughout the day.

Every now and then police would lift the tape blocking off the street to let another hearse through. Nearby, a car had its windows blown out, another reminder of the violence that visited the city the day before. Where the cordon ended, people placed bouquets around a sign that read: “This is Not NZ”.

‘We are not sure who is alive’

Others headed for Christchurch hospital in hope of getting news about their loved ones, with dozens of Muslims still listed as missing. Sharifullah Najib, originally from Afghanistan, walked around the grounds of the hospital with a friend. He was supposed to attend Linwood mosque on Friday evening, where the second massacre occurred, but didn’t make it after being called in to work.

“We have come to visit people, we have lost many, many of our friends,” Najib told Guardian Australia. “We are not sure who is alive and who is in the hospital. I have three friends inside. They have bullets in them. Right now we are going to Hagley school where there is a list of the dead bodies.”

But he added: “New Zealanders are supporting us a lot, they love us. They are good people, they are us and we are them”.

For so many in the garden city, the adrenalin of the situation had passed and grief and exhaustion were setting in. Cantabrians are famously staunch, and health authorities at the hospital urged New Zealanders to turn to their friends and families. Radio stations urged people to call counselling hotlines and asked listeners to join them in prayer. For Christchurch residents their resilience is their greatest strength – but it was being sorely tested on Saturday.

As evening came the names of the dead continued to grow. Pakistani man Naeem Rashid. Four year-old Abdullahi Dirie, who was at the mosque with his father and four siblings. His family members survived, but his uncle told the Washington Post the little boy died in hospital. Indonesian-born Lilik Abdul Hamid, who lived in Christchurch. One of Hamid’s relatives wrote on Facebook: “A friend of one struggle… has passed away in New Zealand… the victim of NZ animal terrorist.”

Many remain missing, including a three-year-old who was last seen at Al Noor mosque with his father and brother. The family of a 14-year-old, described as a good-natured, kind teenager with dreams of being an international footballer, were also waiting for news as to his whereabouts. By evening he was confirmed dead. The year-10 Cashmere high school student was in Al Noor mosque for Friday prayers when the attack started.

“I’ve lost my little boy, he’s just turned 14,” his father said. “I haven’t heard officially yet that he’s actually passed but I know he has because he was seen. [I’m] keeping it together and tears are helping. People are helping. Just by being here, it is helping.”

“This is an act of terror and hate; we stand in solidarity with our NZ community in condemning this horrendous crime,” he wrote. “Our school had three current students on excused leave from school to attend Friday prayers at the main mosque. We are aware that two of these students are missing, and the other is in hospital with a wound.

“A past pupil of our school was also at the mosque and is also missing. We also understand that there were two fathers of students at our school who were both shot in this incident. We are unable to reveal the identities of these men until advised that is appropriate for us to do so.”

Wilson said the best response to such a hateful incident was to show love.

“This can simply mean being kind and caring to each other, be patient, compassionate, and understand everyone will respond differently,” he said.

‘You should have been safe here’

People struggled to find a place to park at mosques around the country on Saturday morning as New Zealanders turned out in force to show their solidarity.

“Sombre, shocked, but not fearful,” was how a man who attended the Wellington Islamic community mosque in Kilbirnie described the mood. A photo he took of the outside of the building showed messages scrawled inside love hearts in support of Muslims.

“The thing that struck me most was actually the kids,” he told Guardian Australia. “Maybe they don’t understand the full gravity but they were there drawing their hearts out.”

Paying his respects near Al Noor mosque, Egen Isaac said: “My heart and soul is in grief.

“I belong to the Egyptian Coptic orthodox church here in Christchurch and I am originally from Egypt where we had 85 churches burnt to the ground in Cairo several years ago by extremists. So I know what tragedy is, and I am so against any tragedy or any violence in the name of any religion or against any religion.

“I just feel astonished and grieved. This is the first time something like this has happened here and I hope the last time it happens here or anywhere. Unfortunately, one of the people I know who went to this mosque was killed and now I am trying to find out when the burial is so I can support his wife. They are Egyptian like me, and my heart is with them.”

The memorial sites were silent. Some would step forward, placing flowers or a note on the ground. A Salvation Army worker at the scene to support the grieving said it was “just the Christchurch way”.

“I’m from Australia where at times like this people bring out the tea and biscuits and start to chat,” she said. “You have a bit of that here but also, just a lot of people quietly grieving, and so I am here in case they do need to talk or need a shoulder.”

Survivors of the terror attacks were also experiencing severe shock. A 52-year-old father, Adeeb Sami, 52, took a bullet to save his sons at Al Noor mosque. He dived over his sons Abdullah, 29, and Ali, 23, as the gunman burst into the mosque.

“He got shot in the back near his spine in an attempt to shield my brothers but he didn’t let anything happen to them.” Adeeb was rushed to a hospital where he underwent surgery to extract the bullet.

“I spoke to dad,” Heba said. “He sounded weak and appeared inconsolable. My family survived the attack but many of our friends didn’t.”

Meanwhile, people were still adding to the mounds of cards and flowers around the country, at mosques, in parks and at street intersections, into Saturday evening.

“This is your home and you should have been safe here,” one of the messages said. “Sending your souls love, happiness and peace.”

Sorgente: ‘My heart and soul is in grief’: Muslims in Christchurch mourn victims of massacre | World news | The Guardian