MPs have inflicted a fresh humiliating defeat on Theresa May, voting to seize control of the parliamentary timetable to allow backbenchers to hold a series of votes on alternatives to her Brexit deal.

An amendment tabled by former Tory minister Oliver Letwin passed, by 329 votes to 302 on Monday night, as MPs expressed their exasperation at the government’s failure to set out a fresh approach.

The prime minister had earlier declined to say whether she would abide by the outcome of a process of “indicative votes”.

The government issued a punchy statement after the amendment passed, warning that it “upends the balance between our democratic institutions and sets a dangerous, unpredictable precedent for the future”.

Three ministers resigned from government in order to back the Letwin amendment: the foreign affairs minister, Alistair Burt, the health minister Steve Brine and the business minister Richard Harrington. A total of 29 Tory MPs rebelled to vote for the amendment.

Harrington, who has been outspoken in his warnings about the risk of a no-deal Brexit in recent weeks, accused the government of “playing roulette with the lives and livelihoods of the vast majority of people in this country” in his resignation letter.

The amendment was drawn up by a cross-party group – led by Letwin and Labour’s Hilary Benn – and gives MPs a series of votes on the alternatives to May’s deal, such as a softer Brexit or revoking article 50.

The prime minister earlier announced that she did not yet have the support to justify holding a third meaningful vote on her deal, but insisted shewould not hand parliament a “blank cheque” to decide what happened next.

Some Tory Eurosceptics reacted furiously. David TC Davies accused Letwin of having “set himself up as a jobbing prime minister”, and Bill Cash branded the vote a “constitutional revolution” that the House of Commons would come to regret.

After gathering Brexit backers at her country retreat of Chequers over the weekend and consulting the Democratic Unionist party leader, Arlene Foster, and the Labour leader, Jeremy Corbyn, on Monday, May concluded she could not yet win sufficient backing for her twice-defeated deal.

EU leaders have handed Britain a Brexit delay to 22 May, if May’s deal is passed this week. Without parliament’s backing, she must return to Brussels before 12 April and set out an alternative plan.

After a weekend of lurid reports about ministerial walkouts and ultimatums, the prime minister appeared undaunted as she addressed the House of Commons on Monday after telling her cabinet she still hoped her deal could win support.

May had earlier criticised the Letwin amendment, warning that the process of indicative votes could yield “contradictory outcomes, or no outcome at all” and set a precedent that would “overturn the balance of our democratic institutions”.

And despite failing to set out any alternative to her deal, the prime minister declined to say whether she would abide by the outcome.

“No government could give a blank cheque to commit to an outcome without knowing what it is. So I cannot commit the government to delivering the outcome of any votes held by this house. But I do commit to engaging constructively with this process,” she said.

Instead, May insisted she had not given up hope of bringing her deal back for a third vote, saying she would “continue to have discussions with colleagues across the house, so that we can bring the vote forward this week, and guarantee Brexit”.

Several Brexiters, including Jacob Rees-Mogg – who attended Sunday’s Chequers meeting – have signalled that they may yet support her deal, if the DUP backed it.

Downing Street also hopes the threat of what May called a “slow Brexit”, if MPs take over the process and demand a longer Brexit delay and a closer relationship with the EU, could convince more leave backers to support her.

Theresa May – and Britain – remain locked in Brexit purgatory

Corbyn told the prime minister: “The government’s approach to Brexit has now become a national embarrassment. Every step of the way along this process the government has refused to reach out, refused to listen and refused to find a consensus that can represent the views of the whole of the country, not just her own party.”

During a highly charged debate in the Commons, a string of senior backbenchers condemned what many argued was a deep political crisis.

“What on earth has happened to our pragmatism, our self-restraint and our common sense?” asked the veteran Conservative MP Nicholas Soames. “Like many others, I have found myself truly distraught at the painful, difficult and intractable position in which our country finds itself.”

Controlling the parliamentary timetable is usually a key power of the sitting government, but MPs have been drawing up plans to step in after May repeatedly declined to change course, despite her deal being roundly rejected on two occasions.

Defending the move, the Tory rebel Dominic Grieve said parliament had been “prevented from doing its ordinary job” by the “straitjacket” imposed by the government.

“Seeing that the government has run into the sand, and has had its deal rejected, we have got to find an alternative,” he said. “There should be nothing that is forbidden to be discussed.”

May had earlier suggested to her deeply divided cabinet that she hoped to hold a third meaningful vote on Tuesday.

She then spoke to Foster, in the hope of securing the party’s support for her deal, which she hoped would help win over Tory Brexiters. But DUP sources insisted after that call that their “position remains unchanged”.

Foster’s deputy, Nigel Dodds, later reacted with fury in the Commons when May said the suspension of the Northern Ireland assembly in Stormont was one reason that a no-deal Brexit would be so damaging. 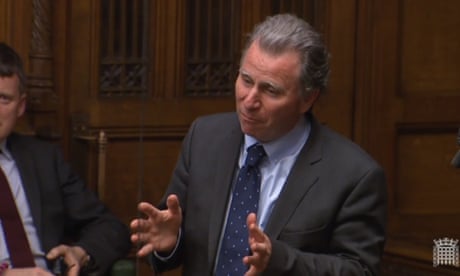 Have MPs gained the upper hand in the Brexit battle?

In her statement to MPs, May came closer than in recent days to ruling out a no-deal Brexit after last week’s European council meeting agreed to an extension of the article 50 timetable.

She told MPs: “Unless this house agrees to it, no deal will not happen.” May had also opened the cabinet meeting by stressing the risks of a no-deal Brexit, amid fears among senior colleagues that she could embrace the idea, rather than accept a longer delay.

However, her spokesman afterwards insisted she had not intended to imply that she would never implement no deal; merely that MPs would be likely to seize the opportunity to avoid it.

“The point the prime minister was making is that the house has voted against no deal, and will take every opportunity to prevent no deal,” the spokesman said.