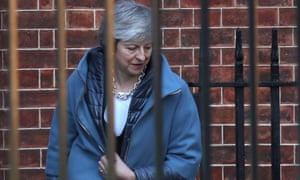 Theresa May will ask for only a short extension to article 50 delaying Brexit by less than three months, after a revolt among pro-leave cabinet ministers and MPs that threatened her premiership.

The prime minister had previously intended to agree a longer extension with the EU involving European parliamentary elections if her withdrawal agreement did not pass by Wednesday.

However, pro-Brexit cabinet ministers left her in no doubt that would not be acceptable to them and anger among MPs was also growing.

A Downing Street source said: “The PM won’t be asking for a long extension. There is a case for giving parliament a bit more time to agree a way forward, but the people of this country have been waiting nearly three years now. They are fed up with parliament’s failure to take a decision and the PM shares their frustration.”

However, the European commission president, Jean-Claude Juncker, said on German radio on Wednesday morning that a decision on a delay to Brexit was unlikely at this week’s EU summit and the bloc’s leaders may have to meet again next week.

Juncker told Germany’s Deutschlandfunk radio: “My impression is … that this week at the European council there will be no decision, but that we will probably have to meet again next week.”

He added: “Mrs May doesn’t have agreement to anything, either in her cabinet or in parliament.”

The text of the letter has not yet been published, so it is still possible the UK could leave open the option of a longer delay if May’s deal does not pass through parliament by 11 April – the point at which Britain would have to prepare to participate in European parliamentary elections.

Only last week, the prime minister had threatened a longer extension to article 50 if MPs did not vote for her Brexit deal, which they rejected by a large margin.

“The house must understand and accept that if it is not willing to support a deal in the coming days and as it is not willing to support leaving without a deal on 29 March, it is suggesting that there will need to be a much longer extension to article 50,” she said. “Such an extension would undoubtedly require the United Kingdom to hold European Union elections in May 2019. I do not think that that would be the right outcome, but the house needs to face up to the consequences of the decisions that it has taken.”

MPs then voted in favour of a government motion saying May would ask for a short extension if her deal passed and acknowledging the EU would want a long delay if it did not.

May will now write to Donald Tusk, the European council president setting out her request, but the UK will need the approval of all 27 member states for an extension to be granted. The EU has said the UK needs to set out reasons for the extension.

The prime minister will likely make another attempt to get her Brexit deal through parliament next week, if she can find a way of getting round the Speaker’s ruling that she cannot submit substantially the same motion twice.

However, it is still looking tight for her to gain the support of Eurosceptic Tory and DUP MPs for her deal or more Labour votes. If it fails again, she is expected to proceed to allow parliament to set out what it could agree as a way forward, such as a softer Brexit or a second referendum.

Andrea Leadsom, the leader of the House of Commons, said it was important for the UK to seek only a short extension to honour the referendum result. She told LBC Radio: “It is absolutely essential we are out of the EU before the European elections.”

Leadsom did not deny reports that she told colleagues they used to be the cabinet to deliver Brexit but now she was not sure.

“I feel the PM’s entire cabinet needs to remain focused on getting us out of the EU,” she said, insisting that the main plan was to get May’s deal through, but she acknowledged different views on what happens if that fails.

However, another cabinet source told the Guardian May’s decision to go for a short extension was a strategic misstep and would not help Eurosceptics vote for her deal.

“This is the move that ensures she stays in No 10, avoiding decision. It will not work as a strategy for getting the deal through,” the cabinet source said.

“This is not what parliament voted for last week. So many of the rebel holdouts are now holding out because they want no deal, but it’s not available. It never really has been. Time we were honest.”

Iain Duncan Smith, the former Tory leader and one of the 76 Eurosceptics holding out against a deal, said there was an opportunity for May to get further concessions from the EU this week in order to persuade more MPs to back her withdrawal agreement.

He told the BBC’s Radio 4 Today programme there would be “repercussions from the public” if there was any more delay to Brexit.

He said: “The letter to Donald Tusk will be setting out what we are looking for in terms of short extension. We need to get this deal done. People are a bit bored of waiting for parliament to get our act together and get this over the line so we can move onto other things. “

Asked how long the requested extension would be, Hinds said: “It is not long. We’ll see what’s in the letter later today. But we had the vote in parliament the other day where we talked about what the definition of a short extension meant which was the deadline of the European elections coming up. I think the prime minister, and all of us, would like it to be sooner than that if possible.”