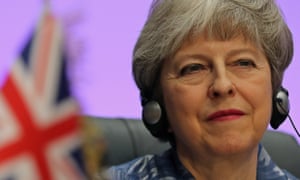 Theresa May has insisted that she will stay on in Downing Street beyond Brexit despite pressure from cabinet colleagues to step down, after she angered MPs by conceding that there would be no “meaningful vote” this week on a revised withdrawal deal.

The prime minister sparked a fierce backlash on Sunday by admitting that the vote may now not be held before 12 March because her team are still negotiating with EU officials on changes to the deal that she hopes will reassure MPs.

“My team will be back in Brussels on Tuesday. As a result of that, we won’t bring a meaningful vote to parliament this week, but we will ensure that that happens by 12 March,” she said. “But it’s still within our grasp to leave the EU by the 29 March, and that is what we are planning to do.”

Theresa May’s Brexit vote delay: what does it all mean?

The shadow Brexit secretary, Keir Starmer, said: “This decision to further delay the meaningful vote is the height of irresponsibility and an admission of failure. Parliament cannot stand by and allow this to happen.”

Cabinet ministers told the Guardian last week that they expected the prime minister to stand down after the local elections in May, and Brexiters would like to see a successor more sympathetic to their case to take over the next stage of the negotiations.

Speaking en route to Sharm El Sheikh, however, where she is attending a summit of the EU and the Arab League, May insisted that she wished to remain in Downing Street to pursue her domestic agenda, including major health reforms. “I was very clear in December with the Conservative party that my job is not just to deliver Brexit. There is also a domestic agenda that I am delivering on that reflects what I said when I was on the doorstop of No 10 when I first became prime minister.

“That is why we have been making key decisions such as extra money for the National Health Service and the long-term plan for the NHS.” Asked if she would resign by Christmas, she refused to reply.

May told Conservative MPs before the confidence vote in December that she would stand aside before 2022, and later made it clear that she intended to contest any snap election.

In a further challenge to her authority, three cabinet ministers – Amber Rudd, Greg Clark and David Gauke – have publicly threatened to defy her in the Commons this week by backing efforts to extend article 50 if no deal is agreed by mid-March.

While there will be no meaningful vote this week, MPs will be offered another chance on Wednesday to vote on a government motion and, crucially, to amend it to bind May’s hands by trying to prevent a no-deal Brexit.

Yvette Cooper, the co-signatory of the Cooper-Letwin bill, which could win the backing of scores of ministers, said: “The prime minister’s last-minute announcement that she won’t put a deal to parliament this week, and is leaving it until just two weeks before Brexit day, is utterly shambolic and irresponsible. 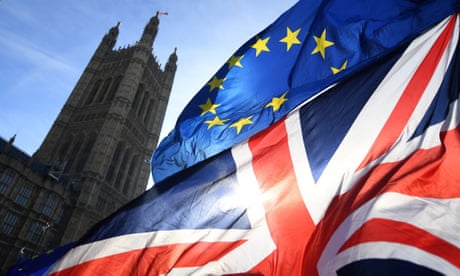 Brexit could be delayed until 2021, EU sources reveal

“The prime minister is still committed to an amendable motion on Brexit next week, so our cross-party group will be tabling a paving amendment to vote on this week in order to get the bill through.”

May refused to condemn the three cabinet ministers speaking out against a no-deal Brexit. “I have recognised and others have recognised that there are strong views that are held on this issue. What we are collectively doing as a government and as a cabinet is working to get that deal,” she said.

“Parliament wants to see changes to the backstop. We have been working with the EU on that. Our focus is on leaving with a deal. My intention is to work with a deal.”

The announcement of the further delay to the meaningful vote infuriated business groups, which have been keenly awaiting confirmation that a deal has been agreed. Edwin Morgan, the interim director general of the Institute of Directors, said: “There is too much at stake to run down the clock and risk an accidental no-deal. We sincerely hope this is the last and final date change.

“The prime minister must make absolutely clear ahead of time what the government’s next steps will be if the vote fails again. Businesses have lost all faith in the political process, and as those first in the firing line of no-deal, they deserve to know more.”

The environment secretary, Michael Gove, earlier urged his cabinet colleagues not to back a Commons vote on delaying Brexit. He said Clark, Rudd and Gauke supporting the bid, which would push back the UK’s exit date of 29 March, would be “the wrong thing to do”.

Following a torrid week in which three female MPs resigned the Conservative whip after claiming that the party had been taken over by Brexit extremists, May was forced to respond to claims from one defector, Anna Soubry, that she had “a problem with immigration.”

May said: “No. As I have consistently said, immigration has been good for this country. What people wanted to see is to ensure that decisions about who is welcomed to this country are taken by the UK government and are not taken by others elsewhere.”

May will make a statement to MPs on Tuesday in a last-ditch bid to prevent her own ministers from voting for Cooper-Letwin and defeating the government. A Whitehall source said: “The clock is ticking and no deal is unacceptable, so we will listen carefully to what the PM has to say.”

Soubry, one of the three who joined the breakaway Independent Group last week, said: “No surprise she’s nothing to bring back because the EU will not reopen the withdrawal agreement. We know this to be the case, because when she came back with it, that’s what she said. This is it, it’s as good as it gets, and the negotiations are over. What a dreadful, avoidable mess.”

Sorgente: Theresa May dismisses pressure to step down as PM after Brexit | Politics | The Guardian