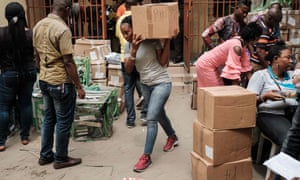 Suspected Islamist militants have attacked a north-eastern Nigerian town, forcing people to flee hours before presidential election polls were due to open, residents have said.

“We have fled, along with our wives and children and hundreds of others,” Ibrahim Gobi, who lives in the town of Geidam in Yobe state, said on Saturday. “We are right now running and hiding in the bushes.”

At about the same time, a witness told Reuters blasts were heard in Maiduguri, the capital of the neighbouring state of Borno. He also said he heard gun shots and Nigerian air force jets were flying overhead.

North-east Nigeria has been hit by the decade-long Boko Haram insurgency with attacks in recent months carried out by offshoot Islamic State in West Africa Province.

People in Nigeria are preparing to go to the polls on Saturday after last weekend’s 11th-hour postponement. The incumbent, Muhammadu Buhari, and his main challenger, Atiku Abubakar, resumed campaigning this week after the announcement by the independent national electoral commission (INEC) at 3am last Saturday, five hours before polling stations were due to open, that the vote was being pushed back.

Unspecified “challenges” meant it could not hold the election as scheduled, it said, amid reports that materials such as ballot papers and tally sheets had not all been distributed.

In multiple briefings since the postponement, the INEC tried to reassure Nigerians it was ready to go ahead with the poll: that the smart card readers introduced in 2015 to accredit voters had all been reconfigured, and that other materials were in the process of being delivered.

The UN’s special representative for west Africa, Mohamed Ibn Chambas, called on Nigerians to “turn out massively”. But less than half the country is registered to vote, and in 2015, there was a 44% turnout among 67 million registered voters. The number registered has risen to 84 million for this year’s election, but the delay will almost certainly affect turnout.

Many Nigerians who had organised their schedules and finances so as to be able to travel to cast their votes will not be able to repeat the process this weekend. In an effort to improve turnout, some airlines and bus companies are offering discounts, while some individuals are paying for voters’ transport.

Many businesses closed early on Friday because of the looming vote, and along with the higher costs to voters, as well as cancelled events, it means the delay will have a huge economic cost: one Nigerian research company estimated it at about $2.2bn (£1.7bn).

The economy struggled during Buhari’s first term, which began with much hope that, as a former general with a reputation for being strict, he would tackle rampant corruption and the country’s myriad security problems. But many are disappointed with the progress on these fronts made by the president, who spent about six months of his term abroad receiving medical treatment.

Buhari was widely criticised for saying that anyone who tried to interfere with the voting process or intimidate voters “will do it at the expense of his own life”, in an emergency party meeting on Monday. “I have given the military and the police instructions to be ruthless. We are not going to be blamed for the bad conduct of the election,” he said.

Addressing the nation on Friday morning, he took a much more conciliatory tone. “Do not be afraid of rumours of violence and unrest. Our security agencies have worked diligently to ensure that adequate security measures are in place,” Buhari said. “You will be able to vote in an atmosphere of openness and peace, devoid of fear from threat or intimidation.”

To win the election outright, a candidate must get an overall majority and at least a quarter of the votes in two-thirds of the country’s 36 states. Otherwise, it will go to a run-off, which must be held within seven days. This would push back the gubernatorial elections, due to be held next weekend.