‘Maduro, our amigo’: loyalists in Venezuela cling to their man | World news | The Guardian 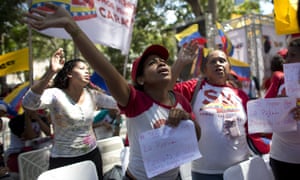 In the final weeks of Hugo Chávez’s life, shattered followers flocked to a palm-dotted square in downtown Caracas to pray for the recovery of “El Comandante”.

Six years on, with Chávez’s leftist Bolivarian revolution seemingly in its death throes, some are returning to appeal for the survival of his successor, Nicolás Maduro. “There are millions of us,” insisted Fernando Andrade, 69, a retired electrician and one of hundreds of mostly elderly Chavistas queuing to sign a pro-Maduro petition in Plaza Bolívar last week. A few hours later, Maduro appeared and was greeted with chants of: “Maduro, amigo! El pueblo está contigo!” “Maduro, our friend! The people are with you!”

But as a revolt against Chávez’s heir enters its fourth week, political observers and former Chavista insiders say that claim to popular support has never been flimsier.

“Chavismo is broken … If they carry on like this, they will have nothing left,” said Nicmer Evans, a longtime loyalist who split with the movement in 2013, and believes that Maduro must now resign if that movement is to survive.

Those descending on Plaza Bolívar insisted they remained devoted to Maduro, who inherited Chávez’s revolution after his death in 2013 and now faces the fight of his political life after a stunning challenge from opposition leader Juan Guaidó.

Little known until just a few weeks ago, Guaidó declared himself Venezuela’s rightful leader on 23 January and is now recognised as Venezuela’s interim president by more than 40 nations, including the United States.

“I have only one president and that’s Nicolás Maduro,” said Maryuri González, a 25-year-old from La Victoria, a city an hour west of Caracas. “I never voted for anyone called Guaidó.”

But experts say support for Maduro is evaporating, with many of those publicly backing him doing so because they depend on government jobs or food handouts known as “clap” boxes.

“He knows he has lost the people. He knows the streets and the barrios [poor areas] are no longer with him,” said Moisés Naím, Venezuela’s former trade minister and a vocal critic of Chavismo.

Evans estimated Chávez, who first took office 20 years ago and governed until his death in 2013, had been able to rely on a hardcore support base of about 30% of voters. For years those diehard disciples lived by the maxim: “Con hambre y sin empleo, con Chávez me resteo” – “Even hungry and jobless, I’ll stick with Chávez.”

Under Maduro – who has presided over one of the most severe economic collapses in recent history – that support base had plummeted to about 10%, Evans thought.

And he predicted that figure would shrink further as sweeping US oil sanctions devastate the economy. “The risk is that if Maduro stays in power, Chavismo will disappear. The Chavistas know this – they know it very well,” he said.

Many believe that leaves Chavistas with an urgent dilemma – ditch Maduro in order to keep their political movement afloat, or sink along with him.

Evans said a fierce internal battle is now raging within the Socialist party, with a trio of Chavistas – Diosdado Cabello, Héctor Rodríguez and Tareck El Aissami – topping the list of likely Maduro replacements. “They know that keeping Maduro in power is a risk to the movement itself … [But] if Chavismo can get away from Maduro, maybe it can rebuild and be one of the many alternatives in the country in the medium-term.”

Evans – who has brokered talks between former Chávez ministers and Guaidó – is one of several “ex-Chavistas” urging Maduro to step aside in order to save a political movement once feted for its dedication to the poor.

In an interview this week with El País, Chávez’s former oil minister, Rafael Ramírez, said that Maduro was “out of time”. “The country stands on the edge of an abyss, fundamentally because Maduro’s situation is unsustainable,” said Ramírez, who split with Maduro in 2017 and appears to be plotting a comeback from exile in Europe.

“He has to go, because he is destroying the country and will continue destroying the country,” Ramírez added. Gino González, a member of Maduro’s all-powerful constituent assembly, said that his movement needed to stand together to resist an imperialist plot to pillage Venezuela’s natural resources by installing a puppet president.

“We might have differences in the way we think things should be done … [but] we must be unified,” González said. “If the North American empire sticks its nose into this country, it will be its last war … the empire will end right here.”

Evans said he feared that some around Maduro were obsessed with the idea of an epic showdown with the US that risked destroying not only Chávez’s political movement but also his country. Maduro’s best option was to step down, call elections, and, in doing so, give Chavismo a chance of survival.

Evans admitted that some in the opposition were bent on “exterminating” Chavismo but he believed that the movement had to be involved in Venezuela’s reconstruction “for the wellbeing of the country”. “It needs to exist as a political party – just like all the others parties.”

Guaidó signalled an understanding of that during a speech to supporters on Friday, telling them that “all sectors” would be represented in a transitional government once Maduro was gone.

With the circle apparently closing on Maduro, there was defiance and indignation among devotees in Plaza Bolívar. “The United States wants to own the whole world,” fumed Fernando Gómez, 77, as he queued to add his name to Maduro’s “Hands off Venezuela” petition.

But there were also hints that some would not mourn the political passing of Chávez’s inheritor. Gómez admitted that it was hatred for US president Donald Trump – a warmongering “psychopath” and a “nutcase” – that had brought him out more than affection for his own leader.

“It’s not so much support for Maduro as rejection of the United States wanting to invade,” he said.

2013 April A month after the death of Hugo Chávez, Maduro is elected president by a narrow margin. The result is contested.

2015 December An opposition coalition takes over the legislature, the National Assembly, ending 16 years’ control by Chávez and Maduro’s Socialist party.

2018 May Maduro wins a second term in an election boycotted by the opposition and tainted by allegations of irregularities including vote-buying.

Sorgente: ‘Maduro, our amigo’: loyalists in Venezuela cling to their man | World news | The Guardian