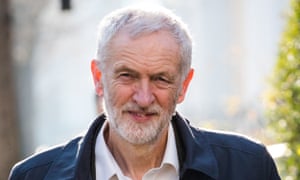 Jeremy Corbyn has finally thrown his party’s weight behind a second EU referendum, backing moves for a fresh poll with remain on the ballot paper if Labour should fail to get its own version of a Brexit deal passed this week.

The decision to give the party’s backing to a second referendum follows a concerted push by the shadow Brexit secretary, Sir Keir Starmer, and the deputy leader, Tom Watson, who fear any further delay could have led to more defections to the breakaway Independent Group (TIG), whose members all back a second referendum.

Although the move has delighted MPs who are backing the People’s Vote campaign, Corbyn is likely to face determined opposition from dozens of MPs in leave seats if the party whips to back a second referendum, including a significant number of frontbenchers.

The former shadow minister Lucy Powell said she believed at least 25 MPs would vote against any whip to back a second referendum, meaning that it would face an uphill struggle to pass the Commons without significant Conservative support.

A private briefing sent to Labour MPs on Monday night and seen by the Guardian makes it clear that Labour’s policy would be to include remain as an option in any future referendum.

“We’ve always said that any referendum would need to have a credible leave option and remain,” the briefing said. “Obviously at this stage that is yet to be decided and would have to be agreed by parliament.”

The briefing also makes it clear that the party would not support no deal being included on the ballot paper. “There’s no majority for a no-deal outcome and Labour would not countenance supporting no deal as an option,” the briefing says. “What we are calling for is a referendum to confirm a Brexit deal, not to proceed to no deal.”

The shadow foreign secretary, Emily Thornberry, indicated on Monday evening that both she and Corbyn would campaign for remain if there were a future public vote.

“We would have a referendum on whatever deal it is that may or may not pass through parliament and we would be saying to people: ‘Do you want this, or do you want to remain?’” she told Channel 4 News.

Thornberry said she “would certainly be campaigning for us to remain” in those circumstances and, when asked if Corbyn shared that view, she added: “If it’s a choice between a disastrous Tory Brexit or no deal, and remaining, then that is what we will have to do.”

The redrawing of Labour’s objectives is likely to stem any fresh flood of resignations to TIG, whose members include the former Labour MPs Chuka Umunna and Chris Leslie as well as the ex-Tory MP Anna Soubry, all key figures in the People’s Vote movement.

Corbyn told MPs the party would back a fresh poll as a final resort in order to stop “a damaging Tory Brexit being forced on the country”.

Speaking to MPs on Monday night, a week after seven MPs who backed a referendum quit the party, Corbyn said Labour would first table its own version of a Brexit deal, including a permanent customs union.

That amendment is set to be tabled to the government’s Brexit motion on Wednesday, when Labour will also whip to back another amendment tabled by Yvette Cooper and the Tory Oliver Letwin, which would legislate for a delay to the UK’s exit date in order to avoid no deal.

May is expected to make a last-ditch attempt to avoid a serious cabinet rebellion over that amendment this week. The Guardian reported last week that at least four cabinet ministers and almost a dozen junior ministers and many others on the government payroll were ready to rebel and vote for the measure.

The prime minister’s most likely option is a pledge to let MPs vote on delaying Brexit if the withdrawal deal does not pass by 12 March, though Cooper and Letwin’s backers have suggested they will reject that approach.

Party sources said Labour would not introduce or back any amendment for a second referendum this week, but see the crunch point at the next opportunity – likely to be the next meaningful vote on the Brexit deal that May has promised to hold by 12 March.

It is highly unlikely Labour’s amendment on its own Brexit deal will pass on Wednesday, making it almost inevitable the party will move to back another referendum.

Corbyn told MPs that Labour “cannot and will not accept” May running down the clock towards no deal. “One way or another, we will do everything in our power to prevent no deal and oppose a damaging Tory Brexit based on Theresa May’s overwhelmingly rejected deal,” he said.

“That’s why, in line with our conference policy, we are committed to also putting forward or supporting an amendment in favour of a public vote to prevent a damaging Tory Brexit being forced on the country.”

Yet recriminations came from leave-supporting Labour MPs almost immediately in the private meeting on Monday night. John Mann, a Brexit supporter, said the decision to back a second referendum would cost Labour in the Midlands and the north. “The price will stop you being prime minister,” he told the meeting.

Outside the meeting, the Labour MP Stephen Kinnock said he had “deep reservations” about the possibility of a second referendum and suggested it would not pass the House of Commons.

“I think it would be deeply divisive. It has a corrosive impact on the sovereignty of parliament and it is not clear to me still what should be on the ballot paper,” he said.

It is understood that about a dozen shadow ministers could consider their positions if Labour whips MPs to back a second referendum.

Future Labour support for a second referendum could come in the form of backing for a proposed amendment to the meaningful vote proposed by the Labour MPs Peter Kyle and Phil Wilson.

That proposal would approve May’s deal subject to a fresh referendum, though senior Labour officials are thought to be uneasy about backing any amendment that endorses the Tory Brexit deal.