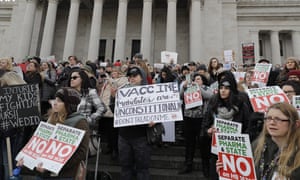 Facebook is under pressure to stem the rise of anti-vaccination groups spreading false information about the dangers of life-saving vaccines while peddling unfounded alternative treatments such as high doses of vitamin C. 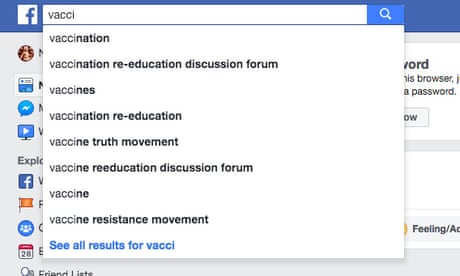 So-called “anti-vaxxers” are operating on Facebook in closed groups, where members have to be approved in advance. By barring access to others, they are able to serve undiluted misinformation without challenge.

The groups are large and sophisticated. Stop Mandatory Vaccination has more than 150,000 approved members. Vitamin C Against Vaccine Damage claims that large doses of the vitamin can “heal” people from vaccine damage, even though vaccines are safe.

Health experts are calling on Facebook to do more to counter these echo chambers. Dr Wendy Sue Swanson, spokeswoman of the American Academy of Pediatrics, said: “Facebook should prioritise dealing with the threat to human health when falsehoods and misinformation are shared. This isn’t just self-harm, it’s community harm.”

Swanson recently met with Facebook strategists and raised her concerns. “Parents deserve the truth. If they are being served up something that is not true it will likely increase their levels of anxiety and fear and potentially change their uptake of vaccines, which is dangerous,” she said.

Fiona O’Leary, an autism activist and campaigner against pseudo-science, called on Facebook to block anti-vaccine groups. “If they won’t shut down closed groups I’d like to see a Facebook watchdog that will remove misinformation causing harm to children,” she said.

The threat posed by the Facebook groups was put in stark relief by the World Health Organization (WHO), which lists “vaccine hesitancy” – reluctance to vaccinate – as one of the top 10 global health threats in 2019. The WHO points to a 30% worldwide increase in measles, a highly contagious illness that can cause deafness, brain inflammation, pneumonia and death, especially in children.

Last month Washington state imposed a state of emergency after 48 people contracted measles. Most of those infected were unvaccinated and under 10 years old.

Dr Noni MacDonald, a professor of pediatrics at Dalhousie University in Halifax, Nova Scotia, Canada, who has worked as an expert adviser to the WHO on immunization, questioned why Facebook was unrestrained by the stringent controls against misinformation put on drug companies. “We don’t let big pharma or big food or big radio companies do this, so why should we let this happen in this venue?”

She added: “When a drug company puts a drug up in the formal media, they can’t tell you something false or they will be sued. So why is this different? Why is this allowed?”

As concern grows about measles outbreaks in the US, the spotlight is increasingly falling on the closed anti-vaccination Facebook groups. The Guardian gained access to some of the groups, finding them to be rife with pseudo-science.

One group, Vitamin C & Orthomolecular Medicine for Optimal Health, tells its users that it is “not an anti-vax group”. Its leader, Katie Gironda, says: “This group needs to remain neutral on the vaccine topic.”

Get Society Weekly: our newsletter for public service professionals

Yet anyone allowed into this closed group of about 49,000 approved members will find ample material questioning the safety of vaccines. They will also find recommendations for alternative remedies that are falsely claimed to protect against disease.

Gironda is listed on LinkedIn as CEO of an online business in Colorado selling high-dose vitamin C. Members of her closed group are encouraged to “shop now” – in one click they are linked directly to her firm, Revitalize Wellness.

The site sells vitamin C powder in bulk, with customers encouraged to give children aged two up to three grams a day whereas the recommended daily intake is 15mg. Twenty-four-pound bags of the powder cost $432.

Revitalize Wellness carries a disclaimer saying that its products are “not intended to treat, diagnose, cure or prevent disease”. But in conversation with members of her closed Facebook group, Gironda gives the opposite advice.

“Vitamin C has an amazing record of fighting the same diseases vaccines were made for,” she posts.

In another entry she says: “I think the cons outweigh the pros on vaccines … Through greed they became a weapon. Until they become safe and not driven by money I would avoid all vaccines.”

Gironda is also listed as an administrator of a separate Facebook group called Vitamin C Against Vaccine Damage. She welcomes new approved members to the group with this statement: “Science and experience of mass amounts of people have proven that vaccines CAN damage the body … Vitamin C is the safest and most effective way to protect from damage for those that are mandated to be vaccinated.”

After the Guardian contacted Gironda, the status of the group Vitamin C Against Vaccine Damage was changed from closed to secret. That put it into an even more heavily shrouded category that hides the group entirely from the view of non-members by taking it out of Facebook searches.

In discussions on the closed groups, members frequently express incorrect information that is reinforced by their peers. In January a woman posted that she lived “near this big measles outbreak”. She asked fellow members: “What should I be upping for my kids to keep them better protected?”

Another member gave this advice: “Load up on vitamin A. Measles susceptibility skyrockets among people with low vitamin A.”

In December a mother in Canada wrote to one of the groups, describing herself as a “first time mom with a 6 month old daughter who is completely vax free. My daughter is sick, I’m so upset and worried. I have always felt confident in my decision to not vax but I’m worried about what she may have contacted [sic].”

David Robert Grimes, a physicist who specializes in countering fake science, said vitamin C would “absolutely not” protect against measles. “Vitamin C does nothing for immunization.”

Grimes said that he had repeatedly reported anti-vaccination groups to Facebook, with no result. “Facebook has a moral responsibility to do something – this misinformation has the potential to kill children.”

The Guardian put it to Gironda that misinformation about vaccines can put children’s lives at risk and that vitamin C was not an effective alternative. In an email she said: “Revitalize Wellness maintains a neutral stance on vaccines. We make every effort to uphold that neutral stance in our Facebook group.”

She said that she was a follower of “vitamin C pioneers”, citing Dr Linus Pauling, Dr Frederick Klenner, Dr Robert F Cathcart, Dr Irwin Stone and Dr Thomas Levy. She added: “There will always be controversy on the efficacy of vitamin C.”

Measles was declared eliminated in the US authorities in 2000 thanks to the measles, mumps and rubella vaccine (MMR). But since then the fraudulent exploits of the discredited British doctor Andrew Wakefield has sown doubts in the minds of many parents about a link between MMR and autism – despite numerous studies that have debunked the connection.

The Centers for Disease Control and Prevention (CDC) has warned there are now about 100,000 American children under two years old who are completely unvaccinated – a fourfold increase on 2001. 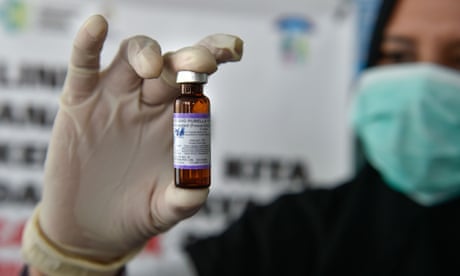 Paradoxically, pressure on Facebook to scrub its platform of inaccurate information comes as the company’s CEO, Mark Zuckerberg, and his wife, Priscilla Chan, are actively funding a $3bn effort to “cure all diseases”. A major plank of their mission is to develop new vaccines.

Facebook is increasingly engaged in combatting misinformation that causes “real-world harm”. Yet despite the health risks, anti-vaccination propaganda is currently not treated as a breach of its content rules.

The Guardian asked Facebook to respond to the proliferation of vaccine misinformation on its platform, but the company did not reply.

In addition to hosting many closed anti-vaccination groups, Facebook has taken in thousands of advertising dollars from those who specifically target parents with often frightening false messages meant to undermine trust in vaccines. Stop Mandatory Vaccination promoted an ad so extreme it was censored by the UK’s Advertising Standards Authority (ASA).

The group later told the ASA, according to the association’s account of proceedings, that it “targeted users with an interest in parenting”, with the intent to “cause parents some concern before choosing to vaccinate their children”.

Sorgente: Facebook under pressure to halt rise of anti-vaccination groups | Technology | The Guardian