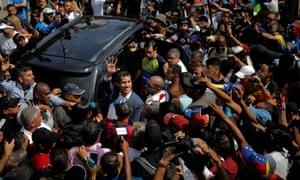 European countries including Spain, France, the UK, Germany, Sweden and Denmark have recognised Juan Guaidó as interim president of Venezuela in a coordinated move made after a deadline for Nicolás Maduro to call presidential elections expired.

“Given that we’ve got to today and Maduro’s regime hasn’t taken any steps whatsoever towards [calling elections], the government of Spain announces that it officially recognises Mr Guaidó, the president of the Venezuelan assembly, as Venezuela’s caretaker president,” Spain’s prime minister, Pedro Sánchez, told reporters at the Moncloa Palace in Madrid.

Jeremy Hunt, the UK foreign secretary, tweeted: “Nicolás Maduro has not called presidential elections within 8 day limit we have set. So UK alongside European allies now recognises @jguaido as interim constitutional president until credible elections can be held. Let’s hope this takes us closer to ending humanitarian crisis.”

Seven EU states had given Maduro until Sunday to call elections, failing which they would recognise the 35-year-old Guaidó as the country’s interim leader.

Sánchez said Spain was committed to defending the rights of the Venezuelan people, adding there were deep ties that bound his country to Latin America. “From today, we will carry on dedicating all our efforts to the task of helping to bring freedom, prosperity and harmony to all Venezuelans,” he said.

The prime minister added that the decision to recognise Guaidó was intended to bring about the holding of free and democratic elections as soon as possible – “elections that will allow the Venezuelan people to use their voice and their vote to decide their own future without fear, threats or pressure”.

Maduro, who has overseen an economic collapse and the exodus of millions of Venezuelans, has accused Europe’s ruling elite of sycophantically following US president Donald Trump’s agenda. The US, Canada and several Latin American countries have disavowed Maduro over his disputed re-election last year, and backed Guaidó.

Maduro maintains the backing of Russia, China and Turkey, and the support of the Venezuelan military top brass.

Russia, a major creditor to Venezuela in recent years, has urged restraint. In a statement on Monday, the Kremlin said European moves to legitimise Guaidó’s “illegal attempt” to seize power amounted to foreign meddling.

EU leaders, including the Austrian chancellor, Sebastian Kurz, had started expressing their support for Guaidó before the midnight deadline on Sunday night. The UK Foreign Office minister Sir Alan Duncan was due to fly to Ottawa to meet European and Latin American leaders in a new international contact group to discuss the most effective ways of supporting Guaidó.

As pressure mounts, Maduro has warned Trump he will leave the White House “stained with blood” if he insists on pursuing what he called a “dirty” imperialist conspiracy to overthrow him.

“Stop. Stop, Trump! Hold it right there! You are making mistakes that will leave your hands covered in blood and you will leave the presidency stained with blood,” Maduro warned during a combative interview with the Spanish journalist Jordi Évole that was broadcast on Sunday. “Why would you want a repeat of Vietnam?”

He also rejected European calls for elections, saying: “We don’t accept ultimatums from anyone. I refuse to call for elections now – there will be elections in 2024. We don’t care what Europe says.”

He added: “You can’t base international politics on ultimatums. That’s the stuff of the empire, of colonial times.”