Brexit backstop: Theresa May to put new proposals to EU | Politics | The Guardian 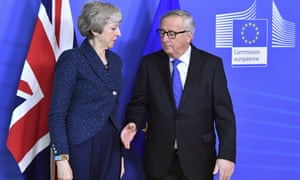 Theresa May will present the EU with new legal proposals to solve the Irish backstop issue on Wednesday, which Downing Street hopes will be enough to convince Eurosceptics to back her Brexit deal.

The chancellor, Philip Hammond, confirmed late on Tuesday that the government no longer intended to pursue alternative arrangements for the backstop in the withdrawal agreement, which had been championed by cross-factional MPs including Eurosceptic Steve Baker and soft Brexiter Nicky Morgan.

Instead, the prime minister is travelling to Brussels to meet Jean-Claude Juncker, the European commission president, with a plan to secure legal assurances that the backstop would not permanently bind the UK into a customs union.

She was forced to admit to Conservative MPs who met her on Tuesday night that the Irish backstop could not be replaced by the “Malthouse compromise” – proposals for a free trade agreement with as-yet-unknown technology to avoid customs checks on the Irish border.

However, she stressed that this solution would still be examined in future to help solve the issue of customs arrangements at the Irish border.

Hammond confirmed that the Malthouse compromise was no longer a viable option in a speech to the Make UK dinner held by the manufacturers’ association EEF on Tuesday night. He called the plan a “valuable effort” that should be looked at again during the transition period, but said it could not provide a solution now.

“It is clear that the EU will not consider replacing the backstop with such an alternative arrangement now, in order to address our immediate challenge,” he said, adding that the alternative arrangement would “require significant changes to EU legislation and customs practices that would need to be negotiated with the EU member states and others”.

No 10 had been hoping to secure a renegotiated withdrawal agreement and put this to parliament next week, but senior sources acknowledged time was running out. Hammond hinted the vote could still come next week, saying that “over the next few days, Members of Parliament need to think long and hard about the choice before them.”

The Malthouse compromise was named after the housing minister, Kit Malthouse, who helped draft it as an attempt to find a Brexit deal the warring sides of the Tory party could back.

The most hardline Eurosceptics have repeatedly said they will only support May’s deal if the compromise is written into the EU withdrawal agreement to replace the backstop – the mechanism that would keep the UK in a customs union if there were no solution to the Irish border.

However, Jacob Rees-Mogg and Steve Baker insisted the Malthouse agreement was “still live and kicking” and said they looked forward to further developments.

No 10 appears to be placing its hopes for breaking the deadlock with the EU on legal assurances that the Irish backstop potentially binding the UK into a customs union would not be permanent.

He is understood to have warned Barnier that the consequence of the deal not passing would result either in a no-deal or in parliament taking control of events, adding extra uncertainty and difficulty to the UK-EU negotiations.

If May and Juncker can agree a possible way forward on Wednesday night, officials will then start work on the technical and legal practicalities. The goal is for Geoffrey Cox, the attorney general, to be able to change his legal advice to the government, which currently states that the backstop could mean a permanent customs union. Cox is expected to give a speech later this week setting out his thinking.

At a press conference in Stuttgart on Tuesday, Juncker played down expectations over his meeting with May. He said: “There isn’t enough movement for me to be able to expect this to be a discussion with a concrete outcome.”

“I don’t know what Mrs May will communicate to me tomorrow,” he said, adding that he was unsure what “our British friends would actually like to have”.

The gap between the expectations in parliament and the reality of the talks in Brussels was made clear on Tuesday by the European commission’s chief spokesman ahead of May’s visit.

Asked about Barnier’s two-hour meeting with Barclay and Cox on Monday, the spokesman said: “We cannot accept a time limit to the backstop or a unilateral exit clause and further talks will be held this week to see whether a way through can be found that could gain the broadest possible support in the UK parliament and respect the guidelines agreed by the European council.”

EU sources expressed frustration that they were having to “re-educate” Cox, who is new to the talks, about the lack of realism in the central demands made by May. Sources said Barnier and his deputy, Sabine Weyand, had been “forensic” in their dismantling of the Malthouse compromise on Monday. Barnier told Barclay that suspending EU law on the border was not a viable solution to the problem. Weyand later privately lamented that the EU was having to repeat arguments to Cox first made in August 2017.

Officials are looking at translating into legal text the previous commitments by Juncker, and his European council counterpart, Donald Tusk, about the temporary nature of the backstop, and their intention to work on a technological solution to supercede the backstop in the future.

But officials are sceptical that such a move would satisfy the Democratic Unionist party or the Tory Brexiters, who had been led to believe the withdrawal agreement would be reopened in order to win their support.

With the negotiations at an impasse, the foreign secretary, Jeremy Hunt, is expected to appeal to Brussels to help the UK come up with a solution during a visit to Berlin.

Between talks with the German foreign and finance ministers, Heiko Maas and Peter Altmaier, Hunt is expected to warn that failure to ratify the withdrawal agreement will be “deeply damaging, economically and politically”.

“In the vital weeks ahead, standing back and hoping that Brexit solves itself will not be enough”, Hunt will say. “The stakes are just too high: we must all do what we can to ensure such a deal is reached. At this momentous time, a heavy responsibility falls upon all of us. We do not want historians in the future to puzzle over our actions and ask themselves how it was that Europe failed to achieve an amicable change in its relationship with Britain – a country that is not simply a partner but a friend and ally in every possible sense.”

With time running out, cabinet was also updated on the option of a no-deal Brexit if May cannot get her withdrawal agreement approved by parliament. One cabinet source said only Liz Truss, the secretary to the Treasury, spoke up emphatically in favour of keeping no deal as a negotiating option.

“I can’t understand how a No 2 at the Treasury could still countenance keeping that on the table,” the cabinet source said, but added that the general mood in the room had noticeably turned against no deal as a negotiating tactic.