‘What is the sea telling us?’: Māori tribes fearful over whale strandings | Eleanor Ainge Roy | Environment | The Guardian 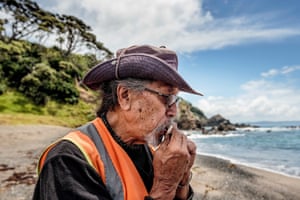 hale whisperer Hori Parata was just seven years old when he attended his first mass stranding, a beaching of porpoises in New Zealand’s Northland, their cries screeching through the air on the deserted stretch of sand.

Seven decades later, Parata, 75, has now overseen more than 500 strandings and is renowned in New Zealand as the leading Māori whale expert, called on by tribes around the country for cultural guidance as marine strandings become increasingly complex and fatal.

“Man’s greed in the ocean is hurting the whales,” says Parata, a fierce and uncompromising elder of the Ngātiwai tribe of eastern Northland.

“We’re having to put up with a lot of stuff today. The public want to hug the whales, they want to touch them, they want to feel good – that’s not the thing. We feel that is ridiculous.”

Whale experts regard New Zealand – or Aotearoa as it is called by Māori – as the whale stranding capital of the world, with more than 5,000 incidents recorded since 1840, and an average of 300 individual animals beaching themselves each year.

Concrete information on why whales strand remains elusive, but “sickness, navigational error, geographical features, a rapidly falling tide, being chased by a predator, or extreme weather” are all thought to contribute, according to the New Zealand Department of Conservation.

Climate change is to blame too, scientists think, with warming ocean temperatures moving whales’ prey closer to the shore and forcing them to pursue their food into shallow waters.

November marked the beginning of whale stranding season, and it started with a surge in incidents, according to whale rescue group Project Jonah, with 140 pilot whales beaching and dying on Stewart Island, 10 rare pygmy whales on Ninety Mile beach, 51 stranded and dead on the Chatham Islands and a spate of individual cases around the country.

And as more whales beach and die – from exhaustion, heat stroke or seagulls feasting on their flesh – an acute sense of grief is growing among New Zealand’s indigenous people, who regard whales as their ancestors and taonga (treasures).

“These days it is like a zoo. People just want to come and gawk at us, without even trying to understand what is happening with the animals and the environment,” says Parata, bristling with anger.

“When will we talk about what is hurting these animals out on the sea? They are drowning out there, they can’t breathe, they beach themselves to be with the Aunties.”

Ngātiwai believe the whales beach when they are ready to die and want to return to their families, the Māori people. Then, their human families use the whales’ gift of their bodies for sacred carvings, for traditional medicines, and even for compost.

There are marked tribal differences across New Zealand and while some tribes work to refloat stranded whales, others like Parata’s Ngātiwai stand back and allow the Department of Conservation and volunteer groups to take the lead in rescue efforts.

Then the tribe moves in en masse and holds a karakia (prayer), names each animal and sets to work removing their bones, blubber, eyes and teeth for cultural purposes.

But indigenous elders say they aren’t being listened to when they tell the government their whale kin are sick, and trying to escape an increasingly polluted and unpredictable ocean.

Earlier this year in South Taranaki, a mass stranding that was described as “unprecedented” left the local Māori tribe scrambling. Security was brought in when thieves attacked a sperm whale with an axe, trying to remove valuable teeth from its jaw.

Parata and his 22-year-old son, Te Kaurinui Robert Parata, were called in to assist. Te Kaurinui was called after the first whale his father ever named, and left university this year to return to Whangārei and study whale tikanga (protocol) and carving.

He says mass strandings are getting more local and international attention and money from donations, but traditional knowledge is being dismissed as overly spiritual.

‘We need to listen’

Māori harvest rights over dead whales have only been officially recognised since 1998, and the practice still elicits horror from some New Zealanders and visitors.

“Our own ancestors wouldn’t say to go down there and hug the whales. That’s a modern thing,” says Te Kaurinui.

Ngātiwai are currently investigating the link between the crisis of kauri die-back killing New Zealand’s native Tāne Mahuta tree and the increasing number of whale strandings.

Parata and his family believe whale oil and byproducts could be used to try to cure Kauri dieback, and want more government money and attention directed towards indigenous knowledge of the interconnectedness of the New Zealand environment, and possible indigenous solutions.

“People dismiss us when we tell them our spiritual understanding of whales – why they are beaching, why they are hurting,” says Te Kaurinui.

“We are not foreigners in this land. We did not take this land off anyone else. We were not lost waiting for some bullheads to tell us what was going on.”

“I arrived at the beach and we leapfrogged between the animals. They were calling out to each other and reassuring each other,” says Werner. “It was a shock. We’re working to adapt but the ocean is changing so fast.”

The recent spate of mass strandings has been described as “heartbreaking” by the conservation department.

But for Parata and his family the slow, painful deaths of their ancestors are personal – and ultimately devastating – for the health of the tribe and the sea.

“It’s very emotional. Our ancestors tell us the strandings are a sign from the sea. So what is the sea telling us? We need to listen.”

Sorgente: ‘What is the sea telling us?’: Māori tribes fearful over whale strandings | Eleanor Ainge Roy | Environment | The Guardian