What has happened in Venezuela is a coup. Trump’s denial is dangerous | Oscar Guardiola-Rivera | Opinion | The Guardian

Juan Guaidó has declared himself president. Now the US and rightwing regimes may seek an excuse to intervene in support

The picture shows him in the act of swearing himself in as “interim”president of Venezuela. His right hand raised to the heavens, as is proper of one who, having no popular mandate, proclaims himself in the name of God like the kings of old. Only this is no kingdom, but a revolutionary republic born of a people’s war. It has since protected its right to self-determination by means of people power and persistent anti-colonial struggle.

In the 19th century the struggle was led by Simón Bolívar, “the liberator”. Rebelling against the laws of the time, Bolivar stood up to the might of the Spanish empire in alliance with then free Haiti. Bolivar made instant enemies of slaveholders in the newly formed US and the rest of the Americas upon embracing a universal right and call to happiness without hypocrisy. That promise was realised only in part. 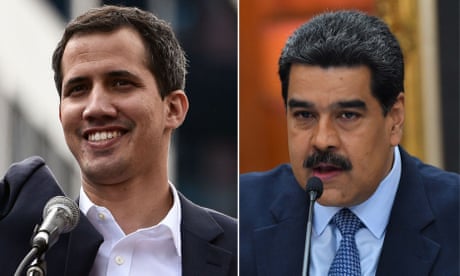 At the dawn of the 21st century, Hugo Chavez invoked Bolívar’s promise and when the poor, black, Amerindian people of Venezuela returned him to power, time and again, especially after the failed US-backed coup of 2002, he too radicalised his stance against the mighty empire Bolivar had only speculated about, America. Again, the promise was realised only in part. Some might say the revolution has been betrayed or stalled during the rule of his successor Nicolás Maduro. No one can deny Venezuela’s problems. The very source of its magic in the 1970s, oil, has proven its downfall. Chavez did not win his country’s independence from oil and its geopolitics.

Crisis loomed when global prices fell, production stagnated, the value of the currency dropped, and under Maduro, dependence on imports and retail monopolies meant shortages that hurt many. That responsibility lies with the government and the industrialist rightwing opposition. But to think that this opposition, revived by Juan Guaidó’s self-proclamation spectacle, acts out of genuine concern for the poor, black people and Amerindians who empowered themselves during the years of the Bolivarian revolution would be foolish.

Enter Donald Trump: megalomaniac, erratic, liar. Calling out the interventionism of previous US administrations, which had been constant in their hatred for Chavez and their attempts to regain influence in the region, Trump promised to put an end to all such shenanigans. But on Wednesday, vice-president Mike Pence saluted Guaidó’s self-appointment, observing that although Trump disliked intervening elsewhere, he “has always had a very different view of our hemisphere”. That’s an explicit invocation of the Monroe doctrine under which the US has held it as its responsibility to intervene in the Americas, which it sees as its backyard.

Trump swiftly recognised Guaidó as the interim president of Venezuela, and was followed by a cohort of Latin American presidents, all-white, upper-class leaders now spearheading the new reactionary wave in the region: Brazil’s Jair Bolsonaro, Argentina’s Mauricio Macri, Colombia’s Iván Duque and Chile’s Sebastián Piñera. They’ll proclaim themselves saviours of democracy and humanitarianism, the liars. Draping themselves in the robes of the liberators of yesteryear, just as Guaidó draped himself in the image of Chavez and Bolívar while holding a constitution with the latter’s image on its cover, they’ll happily support further US sanctions, paramilitary forces training Venezuela’s opposition in the torture tactics that displaced 7 million people in Colombia, or using “lawfare” in pan-American institutions just as happened to Luiz Inácio Lula da Silva and Dilma Rousseff in Brazil, Manuel Zelaya in Honduras and Fernando Lugo in Paraguay.

Trump must not be allowed to dictate Venezuela’s democratic recovery

Expect such measures to have limited purchase. Washington knows it. Then, Trump and the others will be ready to go for the more muscular approach. Not by accident, this could also benefit Trump as elections approach or if he is cornered by investigations and impeachment. War distracts and makes money. Only this won’t be a regional plunder: China and Russia, both with key interests in Venezuela and elsewhere in the region, have followed Bolivia, Mexico, Uruguay and Cuba to call Guaidó’s stunt by its real name: a coup. Russia has indicated it would come to the defence of its ally. In Venezuela, many who may be critical of Maduro but fear most the return of the rightwing opposition to power are unlikely to cheer the newly converted humanitarians. Unlike the supporters of Chile’s Salvador Allende in 1973, they’re armed. Washington awaits developments on the ground while keeping “all options on the table”. That’s doublespeak for hoping the heavy-handed response by Maduro’s government would provide moral justification for an intervention that would surely be approved by the Organization of American States.

There is plenty to criticise Maduro for: late or misguided economic measures, corruption, power-hoarding. But these criticisms cannot disguise a coup or justify an intervention that, if and when it comes, would engulf us all. Trump counts on Colombia’s Iván Duque, Alvaro Uribe’s appointee, and Brazil’s neo-fascists to support this, contributing troops of their own if needed. A neo-fascist runs one of the Americas’ powerhouses in Brazil; a narcissistic liar afraid of being painted into a corner runs the other. That combination is toxic. War in the name of humanity may tempt them, as it did the more liberal leaders of the past. But this time the stakes are higher. Venezuela’s coup is a threat to the entire world.

Sorgente: What has happened in Venezuela is a coup. Trump’s denial is dangerous | Oscar Guardiola-Rivera | Opinion | The Guardian

NUOVA RESISTENZA antifa' > Esteri > America > What has happened in Venezuela is a coup. Trump’s denial is dangerous | Oscar Guardiola-Rivera | Opinion | The Guardian