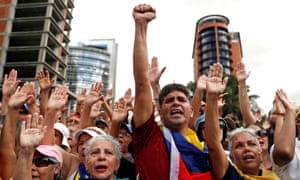 Venezuela’s opposition leader, Juan Guaidó, has secured significant international support after declaring himself interim president in a bid to force out Nicolás Maduro as two nights of unrest gripped the country, leading to the deaths of 14 people.

Guaidó was quickly recognised by the US, Canada, Brazil, Colombia and other US allies in the Americas, while the European Union said the voice of the people “cannot be ignored”.

Donald Trump warned that “all options are on the table” if Maduro – who has overseen the country’s slide into authoritarianism and economic ruin – responded with force against the opposition. Vice president Mike Pence later made clear the US would use “the full weight of our diplomatic and economic pressure. US officials said the US would look at ways to transfer Venezuelan assets and oil revenues to Guaidó and the opposition-run national assembly.

Maduro responded with defiance, cutting off relations with the US and ordering all US diplomats to leave the country within 72 hours.

“We are defending the right to the very existence of our Bolivarian republic,” Maduro told supporters at a rally outside the Miraflores presidential palace in Caracas. He urged them to resist “at all costs” what he called a coup attempt being orchestrated by “the coup-mongering, interventionist gringo empire” and the “fascist right”.

“They intend to govern Venezuela from Washington,” Maduro shouted from the palace’s people’s balcony. “Do you want a puppet government controlled by Washington?”

Guaidó issued his own statement, urging foreign embassies to keep their diplomats in the country. The US secretary of state, Mike Pompeo, later said the US would abide by Guaidó’s directive and ignore Maduro’s order to withdraw its diplomats. 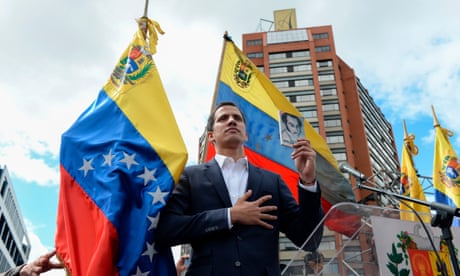 Venezuela: who is Juan Guaidó, the man who declared himself president?

MPs in Russia, a major Venezuelan ally, criticised US actions against Maduro. “The United States is trying to carry out an operation to organise the next ‘colour revolution’ in Venezuela,” Andrei Klimov, the deputy chairman of the foreign affairs committee of the upper house of parliament, said, using a term for the popular uprisings that unseated leaders in Georgia, Ukraine and Kyrgyzstan.

Another committee member, Vladimir Dzhabrailov, said: “I do not think that we can recognise this – it is, in essence, a coup.”

Turkey and Cuba and Bolivia’s Evo Morales have also offered their support for Maduro.

In a statement, 11 of the 14 members of regional bloc the Lima Group said they supported the start of a democratic transition in Venezuela “in order to hold new elections, in the shortest time”. The three holdouts included Mexico, which has maintained a principle of non-intervention under leftist president Andres Manuel Lopez Obrador, as well as Guyana and Santa Lucia.

The EU’s foreign affairs representative, Federica Mogherini, called for work to begin on holding free and credible elections, saying: “The people of Venezuela have massively called for democracy and the possibility to freely determine their own destiny. These voices cannot be ignored.”

On Wednesday, thousands of protesters clogged the streets of the capital, Caracas, with further demonstrations across the country.

The protests came as Guaidó, the head of the national assembly, raised his right hand and said: “I swear to assume all the powers of the presidency to secure an end to the usurpation”.

Venezuela protests as two leaders vie to be president – in pictures

The 35-year-old lawmaker, said his surprise move was the only way to rescue Venezuela from “dictatorship” and restore constitutional order.

“We know that this will have consequences,” Guaidó, 35, told the cheering crowd. “To be able to achieve this task and to re-establish the constitution we need the agreement of all Venezuelans,” he shouted.

Oil-rich Venezuela is mired in economic and political turmoil, with hyperinflation rendering the bolivar currency practically worthless. Shortages in food staples and basic medicines are rampant, and crime is widespread. More than 3 million Venezuelans have fled, causing consternation across the continent.

The country’s opposition has struggled to find a strategy against Maduro, however, and analysis warned that Guaidó’s gutsy move was potentially dangerous: the opposition may have won international recognition, but it has no control over state bodies or the security forces.

“It is absolutely clear that the strategy was decided by both the US government and the Venezuelan opposition, so they share the risk,” said Dimitris Pantoulas, a Caracas-based political analyst and consultant. “The government reaction will come shortly and it remains unclear if the people are ready to defend Guaidó with their lives”

Relatively unknown until this month, Guaidó stepped into the political limelight earlier this month when he declared himself willing to assume the presidency until new elections are held.

In a statement, Trump described the national assembly as the “only legitimate branch of government duly elected by the Venezuelan people” and warned Maduro not to resort to violence.

“We continue to hold the illegitimate Maduro regime directly responsible for any threats it may pose to the safety of the Venezuelan people,” he said.

Asked if would consider a military option if Maduro refused to cede power, the US president said: “We’re not considering anything but all options on the table. All options, always, all options are on the table.”

Pence was more specific in a television interview on Wednesday night. “The United States is going to continue to bring the full weight of our economic and diplomatic pressure until freedom and democracy and fair elections are restored for the people of Venezuela,” he told the Fox Business Network.

Pence said the administration had made a distinction between US intervention in the Americas and elsewhere.

“President Trump has made no secret of the fact that he is not a fan of American deployments all over the world and American entanglements,” he told Trish Regan Primetime. “And yet President Trump has always had a very different view of our hemisphere. He’s long understood that the United States has a special responsibility to support and nurture democracy and freedom in this hemisphere and that’s a longstanding tradition.”

Canada’s foreign minister, Chrystia Freeland, said Maduro’s government was “now fully entrenched as a dictatorship”, and called on him to hand power to the national assembly until new elections were held.

The sudden developments came as tens of thousands joined marches across the country, which followed two nights of violent protests in working-class neighbourhoods of Caracas – once bastions of support for the government – and the apparent foiling of an armed uprising by members of the national guard.

Morelia Armini, an elderly saleswoman from Caracas, could barely contain her joy at the day’s developments. “This is a wonderful thing,” she said, after watching to Guaidó take the oath. “Like a phoenix, this is the rebirth of Venezuela.”

Wednesday also marked the anniversary of the 1958 uprising that overthrew the military dictator Marcos Pérez Jiménez – symbolism that was not lost on María de Jesús, a social worker from Caracas who was born on the day of the 1958 rebellion.

“I was born in democracy,” she said on her way to the march in Caracas. “I want my freedom; this is a dictatorship.”

Across town, several hundred supporters held a rival march in support of Maduro. Though it was dwarfed in size by the opposition protest, those in attendance were in a buoyant mood.

“We are here to support our president and defend our resources,” said Ana Medina, who works for the state oil company PDVAs, as salsa music blasted from loudspeakers. “We know that other countries are against Maduro because they want to take over our resources.”

Analysts have long held that Maduro’s survival depends on the backing of the military, who he has rewarded with senior positions in government and PDVSA.

But it is unclear how solid that support is. Guaidó and the opposition-held national assembly have sought to peel away the military, offering an amnesty to members of the armed forces who help bring about a return to democracy. This week, authorities arrested 27 national guardsmen who tried to launch an uprising against Maduro.

… we’re asking readers to make a new year contribution in support of The Guardian’s independent journalism. More people are reading and supporting our independent, investigative reporting than ever before. And unlike many news organisations, we have chosen an approach that allows us to keep our journalism open and accessible to all, regardless of where they live or what they can afford. But this is only possible thanks to voluntary support from our readers – something we have to maintain and build on for every year to come.

Please make a new year contribution today to help us deliver the independent journalism the world needs for 2019 and beyond. Support The Guardian from as little as €1 – and it only takes a minute. Thank y