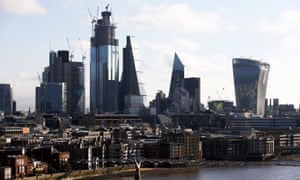 Thousands of British companies have already triggered emergency plans to cope with a no-deal Brexit, with many gearing up to move operations abroad if the UK crashes out of the EU, according to the British Chambers of Commerce.

Before a crucial week in parliament, in which MPs will try to wrest control from Theresa May’s government in order to delay Brexit and avoid a no-deal outcome, the BCC said it believed companies that had already gone ahead with their plans represented the “tip of the iceberg” and that many of its 75,000 members were already spending vital funds to prepare for a disorderly exit.

It said that in recent days alone, it had been told that 35 firms had activated plans to move operations out of the UK, or were stockpiling goods to combat the worst effects of Brexit.

Matt Griffith, director of policy at the BCC’s west of England branch, said that many more companies had acted to protect themselves since May’s Brexit deal was decisively rejected by MPs in the Commons earlier this month.

He said: “Since the defeat for the prime minister’s deal, we have seen a sharp increase in companies taking actions to try and protect themselves from the worst effects of a no-deal Brexit. No deal has gone from being one of several possible scenarios to a firm date in the diary.”

Labour MP Yvette Cooper has revealed to the Observer that two major employers in her West Yorkshire constituency – luxury goods manufacturer Burberry and confectioner Haribo – had both written to her, warning of the damaging effects of no deal on their UK operations. Burberry employs 750 people in Castleford, and Haribo 700 across her constituency.

Cooper is pushing for a Commons amendment – likely to be voted on in Tuesday’s debate – that would pave the way for Brexit to be delayed until the end of this year.

Last week some of the UK’s largest employers – including Airbus, Europe’s largest aerospace manufacturer, which employs 14,000 people in the UK and supports another 110,000 through supply chains – warned of potentially disastrous effects of no deal on its UK activities.

Tom Enders, the boss of Airbus, said: “Please don’t listen to the Brexiters’ madness, which asserts that because we have huge plants here we will not move and we will always be here. They are wrong.”

Ever since the vote to leave the EU in 2016, business groups including the BCC and the Confederation of British Industry have lobbied ministers, arguing that our exporters need access to the EU’s customs union, which allows goods to be imported tariff-free.

But the prime minister has insisted that the UK must leave both the customs union and EU single market if it the referendum result of 2016 is to be fully respected.

Business concerns are growing as Downing Street braces for a series of Commons ambushes over Brexit this week. As well as moves to delay the date of leaving beyond 29 March, MPs worried about a cliff-edge exit or a hard Brexit are also planning to force a series of “indicative votes” in parliament on a range of alternative ways forward. These include a Norway-style arrangement and a second referendum.

No deal would be disastrous. These amendments are not the way to prevent it

Some ministers, including Amber Rudd, the work and pensions secretary, and Richard Harrington, the business minister, have signalled they could quit if May does not allow them to back plans to delay Brexit by granting all Tory MPs including ministers a free vote on the issue.

Meanwhile, some pro-Brexit cabinet ministers are pushing the PM to submit her own amendment pledging to renegotiate her Brexit deal, in a bid to win over Tory Brexiters and the Northern Irish DUP. Concerns are growing within the Tory party that the impasse may end in a snap election.

Today, writing in the Observer, cabinet minister David Lidington says he shares the concerns of those worried about no deal and says the government intends to put a revised deal back to the Commons for another “meaningful vote” next month. “Once we have a blueprint for a plan that can secure the support of the House, the prime minister will go back to the EU,” Lidington writes. “MPs will then have another meaningful vote as soon as possible.”

Meanwhile European commission president Jean-Claude Juncker has warned Theresa May in a private phone call that shifting her position in favour of a permanent customs union is the price she will need to pay for the EU revising the Irish backstop.

Brexiters never had a real exit plan. No wonder they avoided the issue

He said without a major shift in the PM’s position, the current terms of the withdrawal agreement were “non-negotiable”. Details of the call, contained in a leaked diplomatic note, emerged as Juncker’s deputy, Frans Timmermans, told the Observer that there had been no weakening of the resolve in Brussels in support of Ireland, and accused the Tory Brexiters of a “cavalier” approach to peace. “Let me be extremely clear: there is no way I could live in a situation where we throw Ireland under the bus,” Timmermans said.