The Guardian view on Brexit: the government has failed – it’s time to go back to the people | Editorial | Opinion | The Guardian 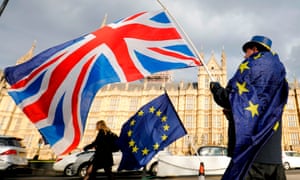 Editorial: We urgently need innovative ways to resolve the referendum vote. Setting up a citizens’ assembly is the first step to break the impasse

Next week the House of Commons will take what is probably the most consequential vote of our era. Unless the government again gets cold feet, key aspects of this country’s economic model, social cohesion and international future will be shaped in the so-called “meaningful vote” over Theresa May’s Brexit deal. It will define what Britain is more than any other political event in modern times. It poses questions and choices that cannot be shirked.

This newspaper supported Britain’s entry into the European Community in the 1970s. We opposed Britain’s departure from the European Union in 2016. We took these positions on the basis of the same long-term principles. Britain is a European nation by virtue of its geography and history. It shares enduring economic and cultural ties and values with the rest of Europe. Above all, Britain has a direct interest, born from the suffering of our peoples in decades of war, in the peace and harmony of Europe from which all can prosper. In the era of Donald Trump and Xi Jinping, Britain’s engagement in Europe is freshly urgent.

However, the Guardian has never been an uncritical supporter of the EU. It has warned against the delusion of a United States of Europe. It has upheld the centrality of democratic nation states within the EU and stressed the enduring reality of national borders. It was enthusiastic about the epochal re-engagement between eastern and western Europe after the collapse of communism, but measured about the practicalities. It was critical about the reckless way that European monetary union was launched in the 1990s and, after much thought, preferred that Britain should keep its distance from the eurozone and its rules. These concerns have been vindicated by events.

Although we opposed Brexit, it is essential to understand why a majority voted for it. Leave’s victory cannot simply be dismissed as nostalgia for empire or dislike of foreigners, though these were factors. Many leave voters felt abandoned and unheard in an increasingly unequal Britain marked by vast wealth in parts of south-east England and austerity and post-industrial abandonment elsewhere. Income levels in London have risen by a third since the financial crash – but have dropped by 14% in Yorkshire and Humberside.

A cry for change

In June 2016 all this came together in the belief of a majority of voters that the EU did not offer the right solution to Britain’s problems. Those of us who disagree need to show humility about what happened, respect the majority, understand the swirling dissatisfaction underlying it, and address it with sustained and practical answers. Ever since the referendum, the Guardian has tried to follow that approach in these columns. We accepted, without enthusiasm, that leave had won. We saw the vote as a cry for change. We hoped that Brexit would therefore be negotiated in the best way open to Mrs May’s government. We took the view that a “soft Brexit” would be the least bad outcome because it would prioritise jobs and the economy, maintain important links with the rest of Europe, not least in Ireland, and help to bind the wounds of 2016 by ensuring that the concerns of the 48% who voted to remain were taken into account alongside those of the 52% who voted to leave. If the government had produced something along these lines, there might have been a pragmatic consensus around a soft Brexit. We awaited Mrs May’s detailed proposals. This was the fair approach. Yet the Brexit process fell vastly short. Ministers did not say what they wanted before invoking article 50. The government took a hard approach, not a soft one. Mrs May misread the public mood in the election of 2017. Her ministers proved incompetent negotiators. They were dismissive of parliament instead of seeking to build a majority there. Nothing substantial was done to address the social causes of the vote. The prime minister prioritised holding the Conservative party together over uniting the country – and failed in both. Her government was contemptuous of genuine concerns about everything from the economy to civil rights. It took little notice of Scotland and Wales. It failed to see that the DUP’s sectarian interests in Ireland are a world away from the interests of Northern Ireland or modern Britain. Instead of producing a deal which could command a majority in the Commons, it produced one that doesn’t even command a majority in the Tory party.

This outcome is not the fault of the remainers, the opposition parties or political elites. The government’s failure is squarely its own responsibility. Brexit has never been a properly worked out policy prescription for Britain’s problems. For many Tories, it is an attitude of mind, an amorphous resentment against the modern world, foreigners, and Britain’s loss of great-power status. This explains more than anything else why hardline Brexiters reject all compromise, refuse responsibility for the practical options, and continue to fantasise about a no-deal outcome which would make things far worse and hurt poor people most of all. It also explains why Mrs May’s deal – which leaves almost everything about the future relationship with Europe up in the air for two more years – is a leap of faith, and scarcely more acceptable than no deal at all.

There has been a larger collective floundering across the political spectrum, including in Labour. We are living through a period of national democratic failure. We are deeply divided in many ways, not just over Brexit. Long-term comprehensive reform of Britain’s concentrations of economic, social and political power is essential. Inequality must be tackled in a radical way, from the top as well as the bottom. There must be innovative, sustainable plans for towns, for the north, for the many areas that feel excluded from progress and success. There is no single magic answer to this national need. The past is no solution. That is partly why the Guardian has been and continues to be cautious about advocating a second referendum on Brexit as the solution to this wider failure of politics-as-usual. It may, in the end, be the only practical option facing MPs on Brexit. But badly framed referendums are a crude way of making democratic decisions, especially because referendums empower those who shout loudest.

Parliament’s role is crucial, but parliament is not perfect. Brexit has exposed the decrepit nature of our political system’s hardware (its constitutional arrangements) as well as its software (the way we do politics). We need to open up to new forms of power and politics – better distributed, more diverse, more strongly integrated, and more modern. Parliamentary sovereignty needs to be better rooted in the people. Other forms of deliberative debate are essential buttresses of the parliamentary process. Ireland found a reasoned route through its own long and divisive argument over abortion through such a mechanism. A citizens’ assembly of voters – a representative group of voters selected at random – held a dignified and detailed civic conversation over several weekend sessions about the practical way forward. Its reasoned conclusions formed the basis of the proposal approved by the Irish people last May and passed into law last month. The contrast between this form of political dispute resolution and Britain’s argument in and since 2016 is humbling. This lesson must be learned and applied in the reopening of the Brexit question.

There is no outcome on the table this month that will not be divisive for years to come. That is true of a no-deal Brexit, which would be disastrous for the vast majority, especially younger people. It is true for Mrs May’s deal, as it sets the terms of the UK’s departure but not the nature of the future relationship with the EU, leaving the door open to more venomous debate. And it is true of a second referendum, because leave voters will fear that this is merely a device to rob them of their voice and restore a failed form of politics which has done little or nothing for them.

No one creates division lightly. But divisions can be mitigated and rationally resolved in significant ways if the perils are recognised and the anxieties that underlie them are determinedly addressed. If Mrs May’s deal is rejected, as it should be, Britain should pause the article 50 process and put Brexit on hold. Parliament should explicitly reject no-deal. MPs should then open up the debate to the country: first, by establishing a citizens’ assembly to examine the options and issues that face the nation; and second, by giving parliament the right, if it so chooses, to put these alternatives in a referendum this year or next. Such a vote should not be a repeat of 2016, but a choice between new options for Britain’s future relationship with Europe which are spelled out and which parliament can implement. This would require a set of clear and plausible alternatives, and the time and political support for the assembly to deliberate. Given the schisms that we are seeking to heal, the medicine is not less democracy but more.

A new and fairer deal

This newspaper wants to see a reformed Britain within a reformed European Union. Neither part of this will be better achieved with Britain outside the EU. The issue facing the country this month is not simply Brexit. It is the kind of Britain in Europe we seek to be. All the major parties have, in different ways, let the country down on Brexit. That is why any parliamentary vote for a second referendum must also be rooted in a more radical approach to political economy, in actively reducing the inequality between regions and communities, in a practical debate about immigration control, and ultimately in reform of democratic institutions. The correct relationship with Europe is inextricably linked to the need to invest in future-focused industries and work, and to a whole-nation redistribution of investment and power to the English regions, Wales, Scotland and Northern Ireland.

This is a movement that, in the current parliament, can only be achieved if Labour wants it to happen. The responsibility on the Labour party to rise to the occasion is very great and will define its future relevance. The overarching purpose must be to bind Britain together, not force it further apart. This intent must be realised in long-term national promises, strategies and programmes, aiming at leave and remain voters alike and across the political spectrum. The message must be that this country needs a new and fairer deal, and that this is best guaranteed by a better Britain in a better Europe. The government has failed, so we must go back to the people.

Sorgente: The Guardian view on Brexit: the government has failed – it’s time to go back to the people | Editorial | Opinion | The Guardian