One thing to be grateful to Brexit for: Britons are buying less on credit | Business | The Guardian 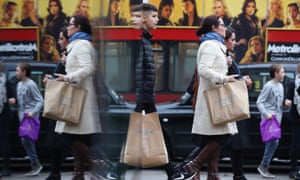 Consumer borrowing is falling, which is no bad thing. But it’s uncertainty, not regulation, that’s acting as the brake

A sharp decline in household spending on the never-never, and especially spending on credit cards, is a trend that must surely be welcomed. The Bank of England said last week in its quarterly credit health check that high street banks were about to witness the biggest decline in such borrowing since records began 12 years ago.

Threadneedle Street said its index of demand for credit card lending over the three months to the end of March had dropped to -20.7 from -7.2.

That is a far cry from the summer of 2017, when consumer borrowing soared above £200bn and MPs across the political spectrum became alarmed at the return of binge buying on plastic.

Business Today: sign up for a morning shot of financial news

At that time, with wages flat or at least not rising by more than inflation, policymakers feared that households were supplementing their incomes with borrowing to the degree that they had in the run-up to the 2008 financial crash.

Regulators reacted to the rise by telling banks to tighten up their lending criteria. Most institutions obeyed, as anyone tracking the trend for borrowing across 2018 can see.

So far, so good. That, after all, was supposed to be how the regulators looked after the interests of the country and its economy, and kept individual households from borrowing more than they could afford to repay.

However, it also seems clear that another force was at play – the Brexit effect, which began to have an impact once it became clear that Theresa May’s government was struggling to find a formula that could win over a majority in the House of Commons.

The fall in sentiment since last summer has proved to be dramatic – far sharper than the banks would ever have expected from a few little tweaks to their lending rules. And the lack of consumer borrowing has been felt in few places more than it has in the car industry.

Since 2010, cars have increasingly been sold through complex lease deals that fall under the credit figures. By 2017, nine out of 10 cars were being sold this way. Then came the diesel emissions scandal and a confused government reaction, which discouraged sales.

Brexit made the situation worse. Consumers were already reluctant to make major purchases such as a new home, or big-ticket household items like furniture. Next on the list of things not to buy was a car.

Figures from the industry show that car sales in the UK declined by almost 7% in 2018. With a major slice of credit no longer in demand, the borrowing figures were bound to tumble.

The shocking element of the story is how much harm a fall in personal lending can cause to the British economy, which has already suffered a lopsided expansion since the financial crash.

A long recovery since 2008 has depended on an expanded workforce prepared to run down its savings and borrow extra funds in a desperate effort to maintain some semblance of pre-crash living standards. Meanwhile, productivity-inducing business investment has remained flat.

Clearly, the economy needs business investment to step in where consumer borrowing has fallen away. That puts the spotlight on the government’s industrial strategy to boost the UK’s capacity to produce sophisticated goods and services, and pay higher wages. The business secretary, Greg Clark, doesn’t need persuading. But the rest of the cabinet does.

Alternatively, the Bank of England could row back on its message to the banks for tighter lending criteria. That, however, would be a message the country would live to regret.

Overall, a record 29 million new customers signed up for the streaming service in 2018, taking its global total to 139 million. Netflix’s share price has risen more than 60% in the last year, valuing it at $155bn – within touching distance of Disney, the world’s most valuable media company.

Yet its shares fell almost 5% in early trading on Friday after it released a set of results that hit or beat almost every target the company and Wall Street had forecast.

Netflix’s model polarises opinion. Its low-cost service, combined with an insatiable need to spend on content to attract and keep new subscribers – $13bn in 2018, “more” this year – means it is spending significantly more than it earns.

The company has more than $20bn in long-term obligations – in effect, payments for new and licensed shows and films due in the coming years – and has turned to the debt market for $10bn. It expects a negative free cash flow of about $3bn this year.

With competition from deep-pocketed rivals in Amazon and newcomers Apple, Disney, WarnerMedia and NBC Universal, Netflix is under pressure. But believers say its first-mover advantage is paying off – and as subscriber growth continues, the economies of scale of delivering content to a global customer base will increasingly mean margin improvements and, eventually, a healthy balance sheet.

Netflix also has plenty of headroom to help its finances by raising prices, at least in developed markets. A string of rises in recent years have failed to dent subscriber growth – and presumably won’t as long as Netflix remains a fraction of the price of traditional pay TV and competitive with rivals. Last week it made its biggest rise to date, affecting US and many Latin American subscribers. Expect Europe to follow in due course.

Ten years on from the credit crunch, many listed retailers have reached a new low. According to analysis by EY, the accountancy firm, more British retailers issued profit warnings during 2018 than in any year since the global financial crisis.

The high street is awash with negative numbers, from a net 4,400 shop closures in just six months last year to more than 85,000 retail job losses in 2018. EY’s figure is smaller but stark nonetheless: general retailers issued 36 profit warnings during the year, more than any other sector on the London Stock Exchange. This reflects a combination of weak consumer confidence, Brexit uncertainty and the rise of internet shopping.

The dent in shareholder confidence in the sector must be large, too. Investors bought into the raised hopes of retailers last year only to see them dashed against the reality of what was happening on the high street: thinning footfall, sale signs and shuttered outlets.

In total, 22 retailers issued profit warnings – 38% of the sector’s quoted companies. Eight issued more than one warning, including the ailing department store chain Debenhams, which saw its market value fall by more than 80% during the year. Other prominent retailers that performed worse than management had expected included Halfords, Superdry and Bonmarché. All of these are dependable, well-known names, but their businesses have been battered.

The new year has thus far offered little sign of a let-up. The womenswear retailer Quiz, the parenting specialist Mothercare, and Marks & Spencer have all failed to offer investors positive signs in January. The ratings agency Moody’s issued negative messages on the credit ratings of New Look and Debenhams last week, adding to their woes.

Retailers need all the support they can get from the government and an online-savvy public. But investors are catching a falling knife.

Sorgente: One thing to be grateful to Brexit for: Britons are buying less on credit | Business | The Guardian

NUOVA RESISTENZA antifa' > Esteri > Europa > One thing to be grateful to Brexit for: Britons are buying less on credit | Business | The Guardian