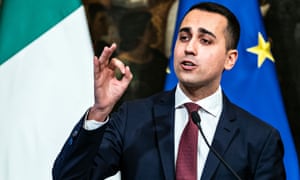 Teresa Castaldo was summoned on Monday by Nathalie Loiseau, the cabinet chief of French European affairs, over the “hostile” remarks, the Italian news agency, Ansa, reported.

Di Maio, who leads the anti-establishment Five Star Movement (M5S), launched his attack against France during a rally in the central Abruzzo region on Sunday.

“If today people are leaving Africa is it because some European countries, with France taking the lead, have never stopped colonising tens of African states.”

He called on the EU to sanction France for “impoverishing Africa” and for migrants to be taken to the southern French port of Marseille, instead of Italy. An estimated 170 people were feared to have drowned in the Mediterranean in two incidents at the weekend as they tried to make their way to Europe from Libya.

Sources told Ansa the remarks were “hostile and without cause given the partnership between France and Italy in the European Union”.

This is the latest fight Italy has picked against France since M5S came to power in coalition with the far-right League last June.

Di Maio has never quite forgiven the French president, Emmanuel Macron, for speaking about “populist leprosy” in a reported criticism of the Italian government shortly after it was formed. Earlier this month, he urged France’s gilets jaunes, who have held several violent anti-government protests since early December, to “not give up”.

Italy also summoned the French ambassador after Macron criticised Italy for “cynicism and irresponsibility” when the country’s leaders turned away a migrant rescue ship with more than 600 people onboard weeks after coming to power.

Di Maio refused to back down on hearing that Castaldo had been summoned.

“I don’t think this is a diplomatic incident, I think it is all true,” he said. “France is one of those countries that by printing money for 14 states prevents development and contributes to the departure of refugees.”