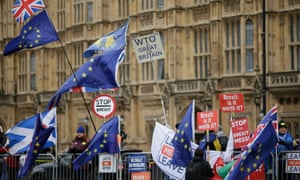 Rolling coverage of the final day of the debate on Theresa May’s Brexit deal, and the votes, with the PM facing a historic, crushing defeat

• How will the various Westminster factions vote?

• The meaningful vote on May’s Brexit deal – what happens next?

Fourteen amendments to the government’s main Brexit motion are on the order paper this morning. You can read them all here (pdf).

John Bercow, the speaker, will announce at the start of the debate which ones he will put to a vote, although we will probably learn about his decision before the debate starts at around 12.45pm, because the whips do get warning about what he has decided.

One of the most important ones is the amendment tabled by the Conservative Sir Hugo Swire. This is intended to impose conditions on the operation of the backstop, and the government is backing it, although there is a debate about how much impact some of its clauses would have in practice.

On the Today programme this morning Swire explained why he thought his amendment was needed.

The fact is that I think without movement on this part of the withdrawal bill, the chances of it getting through this evening are nil.

Despite the EU’s insistence that it will not accept a time limit on the backstop, Swire said his amendment and a similar one tabled by Andrew Murrison would give Theresa May “elbow room to go back to Brussels and say, ‘It is in this area that there can be movement’.”

On Sky’s All Out Politics Sir Vince Cable, the Lib Dem leader, said that if Theresa May lost the vote tonight, Labour should table a motion of no confidence in the government tonight or tomorrow. Many people think Jeremy Corbyn will announce one tonight, but Andy McDonald, the shadow transport secretary, told the same programme that it would happen “soon”.

Here are some more lines from Michael Gove’s interview on Today.

The real danger is if people do not vote for the government this evening, we face either a no-deal Brexit, with the short-term economic damage that would bring, or worse: no Brexit at all.

We know there are people in the House of Commons and outside who have never made their peace with this decision, who want to overturn it.

I think the whole point about the backstop is that it’s deeply uncomfortable for the EU.

If it is a trap for anyone, it’s a trap for the EU. Why? Because the European Union said at the very beginning of this process that there would be no cherry-picking, the four freedoms of the single market were indivisible.

But we have picked a whole bowl of glistening cherries, we have free access to the European market with no tariffs and no quotas but at the same time we say that European citizens have no freedom of movement.

We don’t pay a penny for that access, if we are worried about money after we leave and when we are in the backstop, and at the same time we can say to European nations, ‘Do you know what? Access to our territorial waters for fishing, access to our exclusive economic zone, forget about it’.

We are in a stronger position in the backstop.

This, of course, begs the question, if the backstop really amounts to such a positive outcome for the UK, why Gove and his cabinet colleagues also insist that they hope it will never be needed.

The Press Association has also filed its own explanation of what the Game of Thrones “winter is coming” catchphrase, that Gove also quoted in his interview (see 9.11am), refers to. It is a warning about how “cold weather heralds the arrival of an apocalyptic army of the frozen undead on the borders of the fictional land of Westeros”, the Press Association says. They are led by this chap, the Night King.

My colleague Patrick Wintour just thinks Gove has got his seasons muddled.

“To govern is to choose,” the French prime minister Pierre Mendes-France once famously said, and today the UK faces the most important choice moment since it voted to leave the European Union almost three years ago. But tonight we expected to find that what parliament chooses doesn’t match what the government has already chosen. And both the legislature and the executive are trying implement what the public chose in a crude, binary referendum that subverted the normal system of parliamentary democracy. It’s all a horrible mess, and quite where it will end up remains anyone’s guess.

Michael Gove, the Brexiter environment secretary, was on the Today programme earlier making a last-minute bid to persuade MPs to back Theresa May’s Brexit deal and he argued that, if it passes, there will be an opportunity to “improve” Brexit in the next stage of the talks (the trade negotiations due to start after the EU has left). He told the programme:

I’m saying [to MPs] look fairly at this deal. This is the door through which we can walk in order to ensure that we are outside the European Union and we can determine our future … This deal is stage one. We can improve this process because in stage two, as we negotiate the final status of our trade and other relationships with the European Union, we can choose, and we are in a stronger position. That is the critical question which faces the House of Commons today. Do we walk through that door? Or do we lock it?

He also invoked the Game of Thrones to convey a sense of how awful it would be if May’s deal were voted down.

(If you’re not familiar with it, Game of Thrones is an epic TV drama in which a bunch of mostly sociopathic members of the ruling class constantly feud with each other, resulting in them wrecking havoc on a country loosely modelled on the UK. Comparisons with Brexit are, of course, coincidental, but Gove is a big fan.)

Gove’s intervention is unlikely to help May much. As we report in our overnight preview, she is facing a crushing defeat.

May faces crushing Brexit defeat despite last-minute plea to MPs

And her position has not been helped by the fact that the LabourMP Hilary Benn has this morning announced that he has withdrawn an amendment that, had it been put to a vote, might have minimised the apparent scale of May’s defeat. My colleague Jessica Elgot explains all here.

Here is the agenda for the day.

9.30am: Theresa May chairs cabinet.

After 12.45pm: Geoffrey Cox, the attorney general, opens the final day of the Brexit debate.

After 6pm: Jeremy Corbyn and Theresa May wind up the Brexit debate.

7pm: MPs start voting. Quite how long the process takes depends on how many amendments John Bercow, the speaker, calls, but with each vote taking 15 minutes, and there being a good chance there could be half a dozen or more votes, it is possible that the final vote on the main motion may not come until nearer 9pm. If, as expected, May loses, MPs will expect her to give some sort of immediate response in the Commons chamber, as a point of order. At this point Corbyn could also use a point of order to announce that he will be tabling a motion of no confidence in the government.

You can read all the latest Guardian politics articles here. Here is the Politico Europe round-up of this morning’s political news. And here is the PoliticsHome list of today’s top 10 must-reads.

I try to monitor the comments BTL but it is impossible to read them all. If you have a direct question, do include “Andrew” in it somewhere and I’m more likely to find it. I do try to answer questions, and if they are of general interest, I will post the question and reply ATL, although I can’t promise to do this for everyone.

If you want to attract my attention quickly, it is probably better to use Twitter.