Brexit: May goes back to Brussels but EU says nothing has changed | Politics | The Guardian 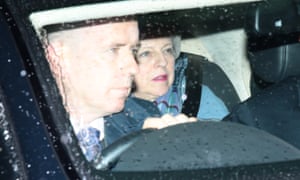 Theresa May was handed a two-week deadline to resuscitate her Brexit deal last night after she caved to Tory Eurosceptics and pledged to go back to Brussels to demand changes to the Irish backstop.

But within minutes of the Commons result, the European council president, Donald Tusk, announced that the EU was not prepared to reopen the deal.

Leo Varadkar, the Irish taoiseach, said the EU needed to “hold our nerve”.

On a dramatic day in Westminster the House of Commons also served notice that it would not support the government if it pursued a no-deal Brexit, undermining what May regards as one of her key bargaining chips in the days ahead.

However, May said: “It is now clear that there is a route that can secure a substantial and sustainable majority in this house for leaving the EU, with a deal.”

She repeatedly stressed protections for workers’ rights, as well as mooting changes to the backstop in the hope of winning over Labour MPs, and promised to keep “battling for Britain”.

The Labour leader, Jeremy Corbyn, said he would meet the prime minister after the amendment against no-deal Brexit was passed. He had previously declined her invitation to talks until a no deal was taken off the table.

May assured MPs she would try to bring back a renegotiated deal for parliament to approve, in a “meaningful vote”, as soon as possible. If she has not managed to do so by 13 February, the government will table a statement about what it plans to do next and allow MPs to vote on it on Valentine’s Day.

The government saw off a series of attempts by backbenchers to seize control of business in parliament to avert a no deal. Fourteen Labour rebels helped May to defeat Yvette Cooper’s attempt to timetable a bill that would mandate the government to extend article 50.

But MPs narrowly passed a more straightforward amendment, tabled by Labour’s Jack Dromey and the Conservative Caroline Spelman, saying they would not accept a no deal outcome, by 318 votes to 310.

May had repeatedly insisted the 585-page withdrawal agreement signed off by EU leaders at a special summit in November was not open for renegotiation. But she urged her own backbenchers to support an amendment rejecting the hardest-fought aspect of the deal: the Irish backstop. 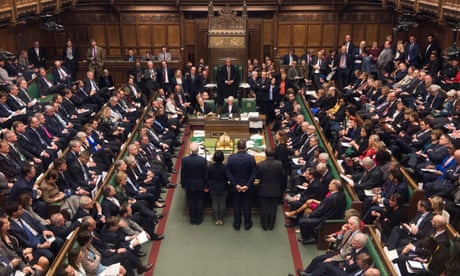 Tabled by Brady, the amendment was passed by 317 votes to 301, a majority of 16. May had earlier said a victory would “send a clear message to Brussels about what the house wants to see changing in the withdrawal agreement in order to be able to support it”.

Officials in Brussels suggested even before the Brady amendment had been passed that reopening the withdrawal agreement was impossible. Some Tory backbenchers said May had been “played” by rightwingers in her party who made clear they reserved the right to vote against her in a fortnight’s time, even if she secured changes.

Steve Baker, the deputy chair of the backbench European Research Group (ERG), announcing that its members would vote for the Brady amendment, made clear they could still reject any renegotiated deal she brought back. “A vote for the Brady amendment is a vote to see if the PM can land a deal that will work. If not then we are not committed,” he said.

The prime minister spoke to European commission president, Jean-Claude Juncker, by phone to set out her intentions before MPs began debating seven amendments that pursued a series of objectives.

May firmly rejected a pair of proposals aimed at giving MPs the opportunity to steer the next stage of the Brexit process, one tabled by Cooper and Nick Boles, and another by the former attorney general Dominic Grieve.

She said they would, “seek to create and exploit mechanisms that would allow parliament to usurp the proper role of the executive”, saying both approaches were “deeply misguided, and not a responsible course of action”. Both were rejected, Grieve by a majority of 20, and Cooper by 23.

May said she could seek changes to the backstop including a time limit, a unilateral exit clause, or an alternative plan put forward by an unlikely group of Tory MPs, including Jacob Rees-Mogg and the former education secretary Nicky Morgan.

May’s cabinet had earlier cautiously welcomed the so-called Malthouse compromise, named after the housing minister who brokered it, with Michael Gove particularly enthusiastic, according to Tory sources, while Greg Clark struck a sceptical note.

It includes resurrecting plans for border checks to be avoided through the use of technology, long favoured by Brexiters including Boris Johnson. But all of the “alternative arrangements” mooted in the course of the debate had already been flatly rejected by EU negotiators.

Privately, some ministers were dismissive, with one cabinet source saying: “I’m trying not to say the word ‘unicorn’.”

But the prime minister warded off threats of a revolt from remainer ministers, who had threatened to back the Cooper-Boles amendment, by promising parliament another chance to vote on the government’s Brexit policy in February. A government source said: “It’s one last push; it’s a chance to lance the boil of ‘we haven’t tried hard enough’.”

As well as attempting to revisit the controversial backstop, May stressed that she will continue discussions with trade unions and Labour MPs about how the government can offer more assurances on workers’ rights, including potentially through legislation.

The shadow Brexit secretary, Keir Starmer, accused the prime minister of pursuing an impossible deal with Brussels in an attempt to assuage the demands of rebels on her own backbenches. “The danger is obvious – that the prime minister today may build a temporary sense of unity on her own benches, but in reality she’s raising expectations that she can never fulfil,” he said.

Jeremy Corbyn had earlier claimed the real “obstacle to a solution” was May and her government. Labour tabled its own amendment calling for MPs to be allowed to vote on options, including Corbyn’s Brexit policy, and a “public vote”. It was defeated by 296 votes to 327.

Sorgente: Brexit: May goes back to Brussels but EU says nothing has changed | Politics | The Guardian