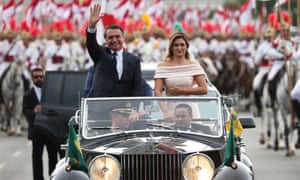 Jair Bolsonaro has announced Brazil’s “liberation from socialism, inverted values, the bloated state and political correctness” after being sworn in as the country’s 42nd president.

His words delighted a crowd of more than 100,000 – many of whom had travelled to its modernist capital for the event, convinced the far-right populist can rescue their troubled country from virulent corruption, rising violent crime and economic doldrums.

The former army captain and his wife Michelle waved to crowds from an open-topped Rolls Royce before he and his vice-president, retired army general Hamilton Mourão, were sworn in at Congress. 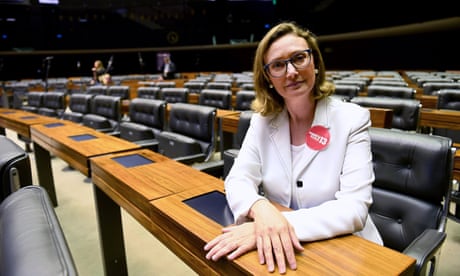 In a brief speech to the chamber of deputies, Bolsonaro thanked God for surviving from a near-fatal knife attack during the election campaign and invited lawmakers to help Brazil free itself from “corruption, criminality and economic irrresponsibility and ideological submission”.

“We have a unique opportunity before us to reconstruct our country and rescue the hope of our compatriots,” he said. “We are going to unite the people, rescue the family, respect religions and our Judeo-Christian tradition, combat genre ideology, conserving our values.”

He also referred to campaign promises such as freeing up gun possession. “Good citizens deserve the means to defend themselves,” he said. Bolsonaro said he was counting on Congress support to provide “legal support” for police to do their work; he has promised impunity for police who kill criminals. “They deserve it and must be respected,” he said.

Bolsonaro has enjoyed the support of Brazil’s powerful agribusiness sector, which he said will have an “increase in efficiency” with “less bureaucracy” – words which will alarm environmentalists and indigenous activists concerned by his plans to reduce to streamline environmental licensing and allow commercial mining and farming on protected indigenous reserves.

These fears seem justified, in one of his first acts as president, just hours after being sworn in, Bolsonaro took the power to identify and demarcate indigenous reserves from the National Indian Foundation (Funai), giving it to the Ministry of Agriculture, according to local media reports.

He also took aim at the leftist Workers’ party he has painted as communists responsible for all Brazil’s ills, from crime to corruption.

“Irresponsibility conducted us to the worst ethical, moral and economic crisis in our history,” he said.

Minutes afterwards, Donald Trump tweeted that Bolsonaro had made a “great inauguration speech”, adding: “The U.S.A is with you!”

Shortly afterwards, Bolsonaro’s Twitter account replied: “Dear Mr. President @realDonaldTrump, I truly appreciate your words of encouragement. Together, under God’s protection, we shall bring prosperity and progress to our people.”

Bolsonaro, a former army captain who served seven undistinguished terms as a member of Brazil’s lower house, was until this year regarded as a marginal figure known for his outbursts against leftists and LGBT people. He rode a wave of righteous anger to power provoked by sweeping corruption scandals and economic recession that Bolsonaro blamed on the leftist Workers’ party that ran Brazil for 13 years.

In an aggressive and deeply polarised campaign that made adept use of social media, Bolsonaro focused attacks leftist former presidents Luiz Inácio Lula da Silva – currently serving a prison sentence for graft – and his successor Dilma Rousseff, impeached in 2016 for breaking budget rules. 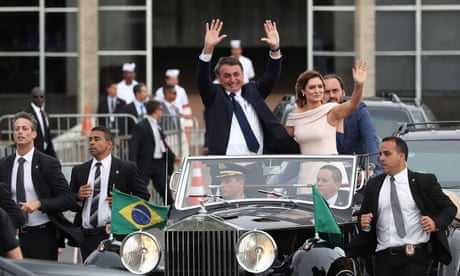 Bolsonaro’s election victory marks a dramatic swing to the right for Brazil, which from 1964 to 1985 was run by a military dictatorship that its new president has expressed support for.

The inauguration took place under the tightest security team seen in decades. Crowds of supporters passed through three checkpoints, including metal detectors. The new government said 115,000 people attended – much fewer than the half a million expected. As they sang and chanted, firemen sprayed some with water to alleviate the muggy heat.

Many of the groups who travelled across country wore matching T-shirts and hats emblazoned with Bolsonaro’s photo and name. Around 80 bikers had come from Fortaleza in the north-east.

“He is the man who will wake this country up, said Francisco Siqueira, 64, a retired army lieutenant who organised pro-Bolsonaro campaign parades of bikers. “Brazilians will be proud when they travel abroad.”

Lawyer Eliana Rabello, 41, had flown from Colatina in Espírito Santo state with 12 family members, including husband Marcelo, 42, a public servant and their daughter Mariana, 7 – all wearing Bolsonaro baseball caps. They had been campaigning for Bolsonaro from the beginning. “We saw he was the guy who was hope for Brazil,” she said, playing down his extremist comments such as threatening a “cleansing” of leftists as “hot blood”.

But to deliver on his radical campaign promises and return Brazil to economic growth will require doing deals with the mercenary Congress, analysts said – something he has sworn he will not do.

Traditionally Brazilian presidents offer ministerial jobs to members of a coalition of parties in return for support – there are over 30 parties in Congress, none of which has a clear majority. “That’s how the game is played,” said David Fleischer, emeritus professor of political science at the University of Brasília and a veteran observer of Brazilian politics. 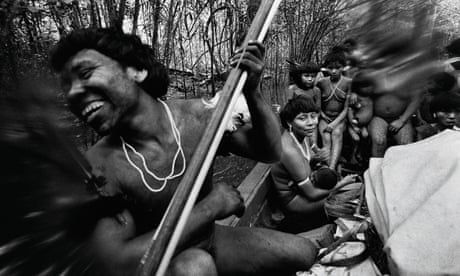 The system was blamed for corruption scandals in the leftist governments of Lula and Dilma Rousseff – and cleaning up Brazil’s graft problem is one of Bolsonaro’s central campaign promises. Instead of “pork barrel” dealing, he plans to lean on the support of cross-party, issue-based blocks in Congress formed of lawmakers who are evangelical Christians or linked to agribusiness and the arms lobby.

“I’m not sure that’s going to work,” said Fleischer. If Bolsonaro wants to get an overhaul of Brazil’s pension system through Congress – something his predecessor Michel Temer failed to do – and reform financial markets regard as key to reducing a soaring deficit, Bolsonaro will need to bargain, he said. “It’s sit down and negotiate,” he said.

All that is yet to come. For now, Bolsonaro is riding a wave of enthusiasm from conservative Brazilians who identify with his promise to return their country to a traditional past. “It’s like a pendulum,” said Elias Figueira, 57, an Uber driver from Rio, “from Marxism back to the right.”

In a poll published Tuesday, 65% of Brazilians said they expected his government to be “good or great”.

“We are going to re-establish order in this country,” he said.

He and Mourão held up a Brazilian flag. “It will only turn red if our blood is needed to keep it green and yellow,” he said.

The crowds cheered, waved flags and celebrated the hope that Brazil – the perennial country of the future – might find its destiny by heading back into its past.

Sorgente: Bolsonaro declares Brazil’s ‘liberation from socialism’ as he is sworn in | World news | The Guardian