Venezuela’s anger is on the streets. But the ballot box remains key for change | World news | The Guardian 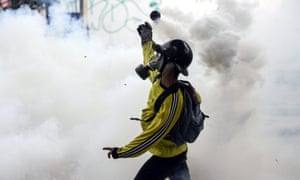 foto – Demonstrators and security forces have clashed in the Venezuelan capital for two days in a row. Photograph: Cristian Hernandez/EPA

theguardian.com/ – Venezuela’s anger is on the streets. But the ballot box remains key for change. Protests over Nicolás Maduro’s authoritarian rule have swept Caracas, but experts say the opposition’s best hope is ensuring elections go ahead as scheduled – Jonathan Watts, Latin America correspondent and Virginia López in Caracas

Despite a string of deaths and fierce clashes with riot police, Venezuela’s opposition are trying to ramp up the street pressure on the beleaguered government of Nicolás Maduro.

The mass demonstrations this week are a sign of frustration at the president’s increasingly authoritarian rule. But with the security forces still loyal to the socialist president, analysts say the best long-term hope for those who seek change is likely to remain the ballot box.

Deaths and injuries reported amid ‘mother of all marches’ in Venezuela

For the second day in a row, central Caracas was filled with clouds of tear gas on Thursday as protesters, including several prominent legislators, confronted security forces.

This followed “the mother of all marches”, which drew hundreds of thousands to anti-government rallies across the country on Wednesday. Simultaneous demonstrations by government supporters led to violence in several cities.

In several cases, it was lethal. In Miranda, a national guardsman was killed by a sniper. In San Cristóbal, a university student was chased down and executed. In Caracas, an 18-year-old bystander was shot in the head by armed government supporters as he set off to play football. Clashes between the two sides earlier this month resulted in the death of at least five others.

This is the bloodiest phase of Venezuelan politics since 2014, when 46 people died (then, as now, the dead include victims on both sides). But the energised opposition are in no mood to step back from confrontation, which allows them to tap public dissatisfaction at the world’s deepest recession and highest inflation, along with worsening unemployment, poverty and shortages of food, medicine and other basics.

Given the country’s recent history, nobody is under any illusions that a single protest will unseat the government. Last September, massive turnouts in support of a recall referendum were ignored by the authorities. But analysts say those who feel only deja-vu at protests are missing the point.

Margarita López-Maya, a professor of social sciences, said the recent rallies have drawn international attention and helped to rejuvenate and unite a weary and divided opposition.

“Legislators are now willing to go march and to take a beating. You didn’t see that before,” she says. “The international community has become aware of what is happening here, and they have sanctioned and heavily criticised the Maduro government. This also hadn’t happened before”.

Michael Shifter, president of Inter-American Dialogue, said the country remained in stalemate, but it would be wrong to assume nothing has changed.

“We saw more anger and more intensity at this march. There were also more people from popular sectors who were willing to protest than previously. It was not just the middle class. This is a sign that the base of Chavismo is extremely upset and disenchanted.”

Venezuela on the brink: a journey through a country in crisis

The most likely way out, he suggested, was to ensure that elections – particularly the presidential race that is supposed to take place at the end of 2018 – go ahead as scheduled.

“That should be the focus going forward. Insisting on elections is something the international community could also support very easily,” he said, noting also that the ruling United Socialist Party (PSUV) figurehead Hugo Chávez prided himself on being able to face the people at the polls.

Maduro, by contrast, looks increasingly reluctant to allow the public to pass judgement on his rule. Lacking his predecessor’s charisma and economic good fortune, he has struggled in elections.

After a razor thin victory in the 2013 presidential race, his party suffered a landslide defeat in the legislative campaign in 2015. Since then, his government has steadily turned its back on democracy.

Last year, the electoral council blocked a recall referendum and regional elections were postponed indefinitely. In March, the strongly pro-government supreme court briefly attempted to assume the powers of Congress.

Two weeks ago, opposition leader and former presidential candidate Henrique Capriles was barred from running for office until 2032. Another opposition figure Leopoldo López has been in prison for the past three years. Six members of the Primero Justicia party were also detained on Thursday in El Paraíso, a neighbourhood in western Caracas, according to lawmaker Jorge Millan.

The cries of “dictator” grow louder at each march.

Regional pressure is growing on Venezuela. The United States, along with 11 other nations in the Organisation of America States, have urged the government in Caracas to respect democratic principles and allow elections. But such appeals have limited impact.

Maduro and his ministers have dismissed what they call “outside interference”, repeating old and unproven claims that they are the targets of an attempted coup aimed at grabbing the world’s biggest oil reserves and removing a socialist administration. Their indifference to the opinions of capitalist countries was underlined this week, when Venezuelan courts seized the assets of a GM vehicle processing plant.

foto – Violence after anti-government march in Caracas – in pictures

Such moves, along with the steady deterioration of the economy, have prompted fears that Venezuela could become the Zimbabwe of Latin America with multiple crises dragging on while an unpopular government clings to power.

But it is not there yet. Although elections, opposition and protest are increasingly threatened, there is still wider scope for them to influence the nation than in Cuba or Nicaragua, argues Javier Corrales, professor of political science at Amherst College. That may be a low bar, but he says that makes demonstrations like Wednesdays all the more important.

Venezuela can no doubt expect more demonstrations. The question is whether it can also expect more elections.

Sorgente: Venezuela’s anger is on the streets. But the ballot box remains key for change | World news | The Guardian

NUOVA RESISTENZA antifa' > Esteri > Latino-America > Venezuela’s anger is on the streets. But the ballot box remains key for change | World news | The Guardian