washingtonpost.com – Why the Democrats’ 2017 comeback dream is like nothing we’ve seen before – By David Weigel

In 2004, the last time that Democrats comprehensively lost a national election, an argument broke out about how the party should reform. John F. Kerry had been just one state — Ohio — away from victory. Democrats had lost Senate seats in red states, but held their own in the House and in state legislatures. (Republicans netted three seats, but would have lost a net of two seats but for mid-decade gerrymandering in Texas.) Hillary Clinton loomed as the favorite for the party’s 2008 presidential nomination, but it was clear to many pundits that the party needed someone else. No, not Barack Obama. Clearly, the party needed a moderate nominee from red America.

There were plenty of takers. Then-Sen. Evan Bayh (D-Ind.), who had never lost an election, visited early primary states and warned that “many Americans wonder if [Democrats are] willing to use force to defend the country even under the most compelling of circumstances.” Then-Tennessee Gov. Phil Bredesen (D) shamed Democrats for not campaigning harder for Southern voters — at a DNC meeting, where the right people were watching. In a cover story for the New York Times magazine, then-Gov. Mark Warner (D-Va.) suggested he could win moderate Republicans, his implication being that Clinton could not.

Clinton, indeed, did not win the 2008 nomination. Sixteen years of speculation about her inevitable presidency ended on Nov. 8. But the hand-wringing of 2005 is just as instructive as the Republicans’ hand-wringing of 2013. In recent history, the most confident analysts of our political parties have argued that victory will come through moderation. They have been completely wrong. Barack Obama became the first Democrat since FDR to win two popular vote majorities; Donald Trump became the first Republican since Ronald Reagan to win most of the Midwest.

In both cases, the winning party did not so much moderate its stances as run against the failure of the incumbent party. That failure was obvious in 2008 — arguably, as early as mid-2006 — in George W. Bush’s low approval ratings and the collapsing economy. It was tougher for Democrats to see in 2016, as Obama’s approval numbers were high and the metrics usually used to gauge the health of the economy, like employment, stock markets, and GDP, were moving the right way.

The culture was moving the right way, too. In 2004, Republicans blindsided and embarrassed Democrats on social issues, leading to a panic over how the party had lost religious voters who agreed with them on economics, especially Hispanic and black voters. This year, the Republican nominee badly lost the popular vote, and while he overperformed with nonwhites compared to Obama’s opponents, he underperformed the rest of the GOP’s nominees going back to 1972. His 46 percent of the vote was the lowest for any winning Republican nominee since the three-way election of 1968. Unlike in 2004, Democrats do not look at the electorate and see a majority of personal rejection. Gay voters don’t see a president-elect who wanted to change the Constitution to prevent them from getting married; they see one who ceded the issue and literally waved a rainbow flag.

For that reason, the last seven weeks have seen Democrats cement their move to the left. The only debate over the future of the party is happening in the race to run the Democratic National Committee. As we reported this month, that’s reopened some divisions over the 2016 primary, but it’s actually seen the party consolidate around left-wing positions.

Outgoing Labor Secretary Tom Perez, whose biggest impediment in the race is being seen as the establishment opponent of Rep. Keith Ellison (D-Minn.), has not even tried to defend the Obama administration over the Trans-Pacific Partnership. In a tweet today, already being mocked in pro-Ellison circles, Perez brands himself as a Mother Jones-approved “progressive who gets things done.” 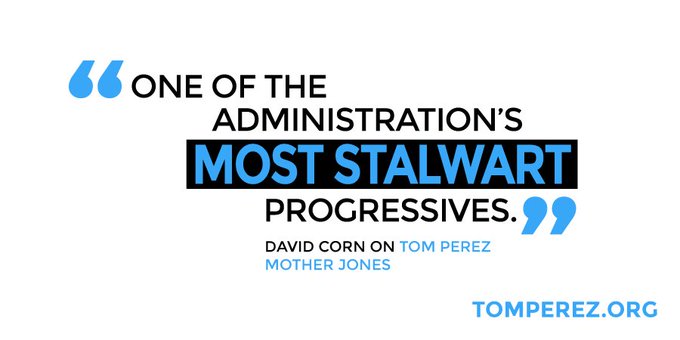 video – Who is Tom Perez?

The DNC race is also notable as the first that includes absolutely no straight white men. (Ray Buckley, the one white male candidate so far, is gay.) In 2005, Democrats looked for another Bill Clinton; in 2013, Republicans surmised that their defeat required a literal autopsy, and probably a candidate who could appeal to the “rising electorate” of nonwhites. None of that turned out to be necessary.

Yet both the 2008 and 2016 elections went to candidates with economic policies that appealed to working class, mostly rural, white voters. In 2008, Democrats discovered that these most of these voters did not actually care if the candidate selling those policies was a black man. From 2004 to 2008, the party’s share of the white vote in Wisconsin rose from 47 percent to 54 percent; in Pennsylvania it rose from 45 percent to 48 percent. In 2012, Trump won those states by flipping the white vote, grabbing 56 percent of it in Wisconsin and 53 percent of it in Pennsylvania. The unusually large vote for third-party candidates meant that Hillary Clinton’s share of that vote was even lower than Kerry’s — more comparable, actually, to the vote for Walter Mondale in 1984.

But the 1984 election did not change the makeup of the major political parties. Millions of voters pulled the lever for Ronald Reagan, then voted Democratic for every lower office, from Senate down to alderman. In 2016, the Democrats lost their last state legislature in what we generally call the South, after a wipeout in Kentucky’s House of Representatives.

Early in the 2016 cycle, plenty of Democrats worried about this and thought they saw a way to prevent it: by nominating Clinton for president. In early 2015, writing then for Bloomberg, I talked to Democrats from Kentucky and West Virginia, all of whom thought that the losses of the Obama years could be reversed when Obama himself left the political scene. Clinton, said Sen. Joe Manchin (D-W.Va.), “would be the best hope in the state of West Virginia to return [to Democratic] on a national level.”

Clinton went on to win just 26 percent of the vote there, the worst performance for a Democrat in West Virginia’s 152 years of electoral college membership. (Yes, even George McClellan ran better against Abraham Lincoln.) The state had fallen off the Democrats’ presidential map a decade earlier, and Clinton embraced environmental policies with the knowledge that they’d cost votes, and the calculation that they would win votes elsewhere. And coal country didn’t cost Clinton the presidency; had she won Florida and Wisconsin, she’d be writing her inaugural address.

Still, the party’s expectations about Clinton demonstrated just how bad parties are at analyzing what they need to fix to win. Next year, while it is not what they boast about, Democrats are expecting mistakes by Trump — the most unpopular incoming president in decades — to create opportunities for them. Their debate about winning a new majority is not about a savior from red America, or even a change in policy. It is about better organizing, and how to win back voters who were Democrats until the party was branded as neoliberal and pro-trade.

There has really never been an election aftermath like this. And there has never been a moment when one party consisted almost entirely of conservative and moderate white voters and one consisted of nonwhites and progressive whites. There will be more certitude about what the parties stand for, and less dreaming for a Democratic savior.